I have a problem in configuring a VI Reference to interface with a Linkam ActiveX control through a Register Event Callback function. I have created a strictly typed VI with reentrant execution, with all of the correct connectors, as shown in the image below, but LabView complains of a broken wire. The only difference between the input and output seems to be that the output shows up as an asynchronous function, and the input wants a normal function (synchronous?). I cannot find any option to make my VI reference become synchronous. Does anybody have any suggestions as to what to try next? Many thanks, Don't try to build it yourself, it never works. 🙂

Would someone be able to explain why this is broken? I have a situation exactly like the original poster; the strictly-typed VI refs match exactly, yet there's still a Wire Class Conflict. The workaround is to recreate the VI using "Create Callback VI", but it's laborious to transfer code, VI icon, documentation... What gives?

Here's the exact error in LabVIEW 2012: "Wire: Class Conflict - You have connected a refnum of one type to a refnum of another type and both types are members of some class hierarchy, but there is neither a simple up cast nor type cast between the two classes."

I'm struggling to replicate this one in LabVIEW 2012f1.  Whether I create the callback function manually or automatically I do not see the broken wire.

The only things which jump to mind when talking about synchronous and asynchronous functions are the execution options in VI properties.  For instance, the VI priority or whether it is reentrant.  If you could provide some simple steps to replicate (as recreating the above example did not show me the behaviour) then I'll be happy to dig a little deeper.

Hi Pete! Thanks for responding. A simple way to recreate this is to:

After completing step #4, you'll have a broken wire between the VI that you created and the Rev Event Callback node. Even if you Context Help and hover over the wires of both VI static refs of the created VI and the VI you recreated, their Data Types will be identical (as shown in the original post).

Does this help recreate the issue? Thanks!

Thanks for the steps - this is identical to what I had done on my machine here.  I did toy with the execution settings afterwards (not the most structured testing, I must admit..) and it now does not occur.

I will set up a clean install tomorrow morning for testing.

Oh, it's also worth mentioning... (I'm like the worst support customer ever, slowly revealing more and more details, you think I'd know better :b)

This problem is happening on VIs that were created exclusively using the "Create Callback VI", so no VI execution settings have been changed from what was created. The only thing that I'm changing is the datatype of the final "User Parameter" input. As I redefine the datatype of that control is when the VI breaks.

Sorry for the delay in getting back on this one.  Using the Adobe Reader ActiveX control (the first in my list..) I cannot replicate the behaviour.  Well, I can, but if I change the datatype of the Callback VI then the wire goes back to being solid. 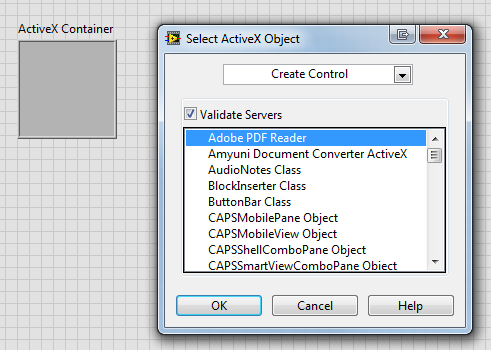 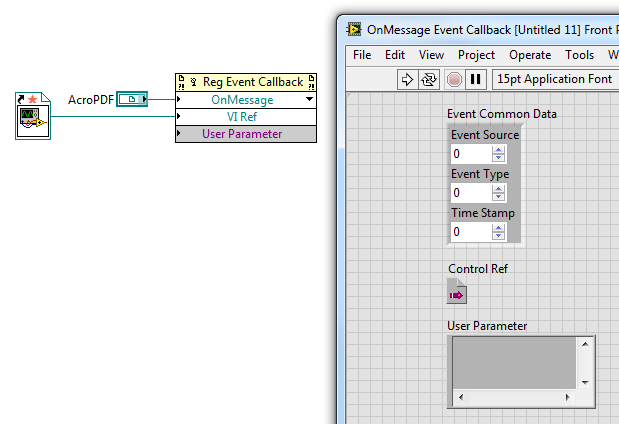 3 - Wire something to the user parameter input (wire will break) 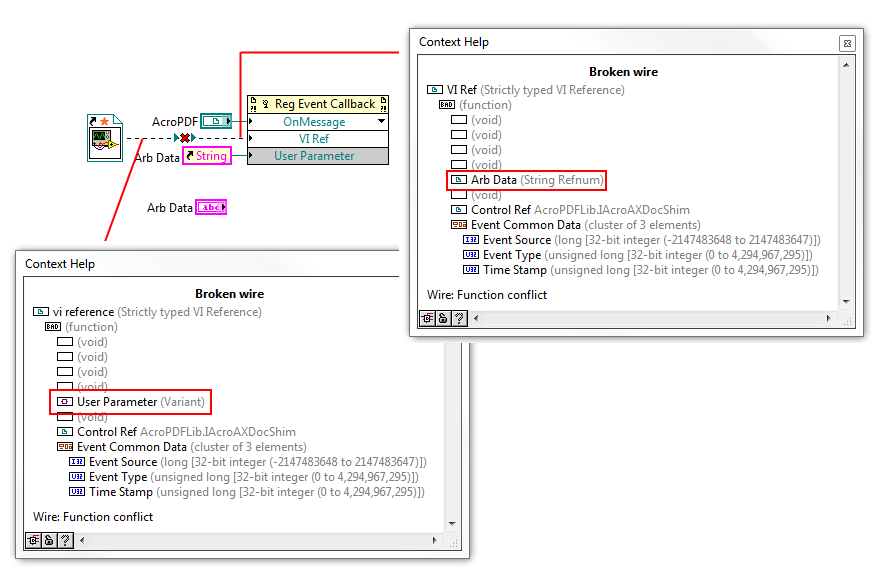 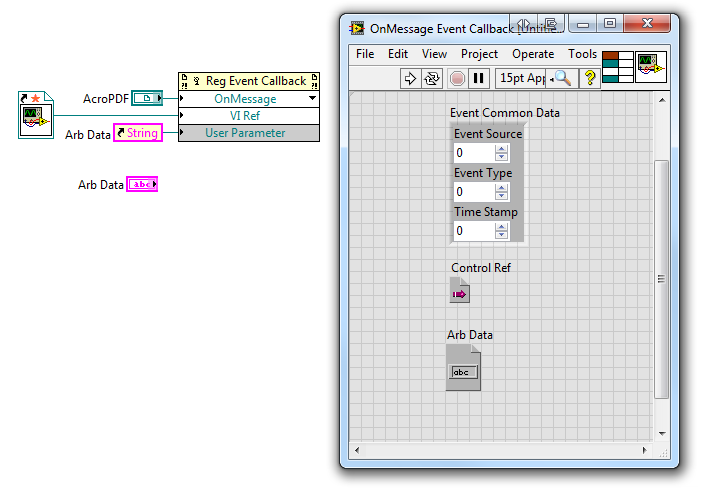 So, I think we're not dealing with any problems with .NET callbacks; it's a problem with my understanding of strictly-typed VI references and the concept of "VI Interface Types". Why are these VI Interface Types different for two seemingly identical VIs?


This problem is happening on VIs that were created exclusively using the "Create Callback VI", so no VI execution settings have been changed from what was created. The only thing that I'm changing is the datatype of the final "User Parameter" input. As I redefine the datatype of that control is when the VI breaks.