View Ideas...
Active
Inactive
Labels
Idea Statuses
Turn on suggestions
Auto-suggest helps you quickly narrow down your search results by suggesting possible matches as you type.
Showing results for
Search instead for
Did you mean:
Options
25 Kudos

By default, DAQmx terminal constants/controls only show a subset of what is really available.  To see everything, you have to right-click the terminal and select "I/O Name Filtering", then check "Include Advanced Terminals": 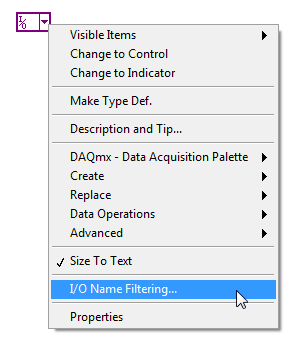 I guess this is intended to prevent new users from being overwhelmed.  However, what is really does is create a hurdle that prevents them from configuring their device in a more "advanced" manner since they have no idea that the name filtering box exists.

I am putting "advanced" in quotes because I find the distinction very much arbitrary.

As a more experienced DAQmx user, I change the I/O name filtering literally every time I put down a terminal without thinking about it (who can keep track of which subset of DAQmx applications are considered "advanced").  The worst part about this is trying to explain how to do something to newer users and having to tell them to change the I/O name filtering every single time (or if you don't, you'll almost certainly get a response back like this).

Why not make the so-called "advanced" terminals show in the drop-down list by default?

I have NI USB-6251 and I have to use maximum sampling rate 1250 Khz how i could put anti-aliasing filters? help please

also I have NI 9234 to receive a signal from the 4-Channel with sampling rate 50 khz for each channel should I put anti-aliasing filters in this case or not?
thanks

Your question belongs in the LabVIEW forum or Multifunction DAQ.

It does not belong in the Idea Exchange which is about new ideas to improve LabVIEW.