I'm really tired of dropping sequence structures, timing VIs, subtract functions and creating indicators, just to get an idea of the execution time of a VI or portion of a VI. I'm spending 30 seconds doing this, and then another 30 ripping it out of the VI once I'm done. I want my minute back.

I just drop the timing probes along my error wire, and see the dt between the execution of the probes. I usually have error wires at least enforcing data flow throughout my VIs. Installation and Basic Use

You should consider using VIPM (http://jki.net/vipm) to package your probes in a VI Package to make it easier to distribute them.  An example of this was done by Saphir's VI Box Probes:http://decibel.ni.com/content/groups/saphir-toolkit/blog/2010/11/18/set-of-custom-probes

BTW - The Saphir VI Box probes include some timing probes that are similar to yours.

If you stick the Enqueue Event inside the t0 case structure, you can have all the other probes give the time relative to a specified point on the BD, rather than having to guess what order they execute in.

*EDIT* You also have to manage the queue differently (i.e. preview queue) or use some other method to pass data around.  Same general concept, though.

Nice feature and seems to work well at first but during my second try, after stopping and running my VI again without removing the probes, I got a continuous stream of error pop-ups (something to do with the Queue reference) that were really hard to stop and ultimately had to kill LabVIEW who was stuck at 100% CPU even after I succeeded at stopping my test VI.   Be careful if using that tool that you save your code previously! They can be helpful though. I think that the Probes from Saphir (Free on the Tools Network) are more reliable.

So I've always like the look and functionality of this timing probe and have been using it for years.  That being said Darren posted a nugget over here about how starting in 2016 there are probes that can work on all data types.  His probe worked great but didn't have the breakpoint functionality, or the aesthetics of this one, so I combined them.  It is saved in 2017 because I don't have 2016 to test with but it likely can be back saved. 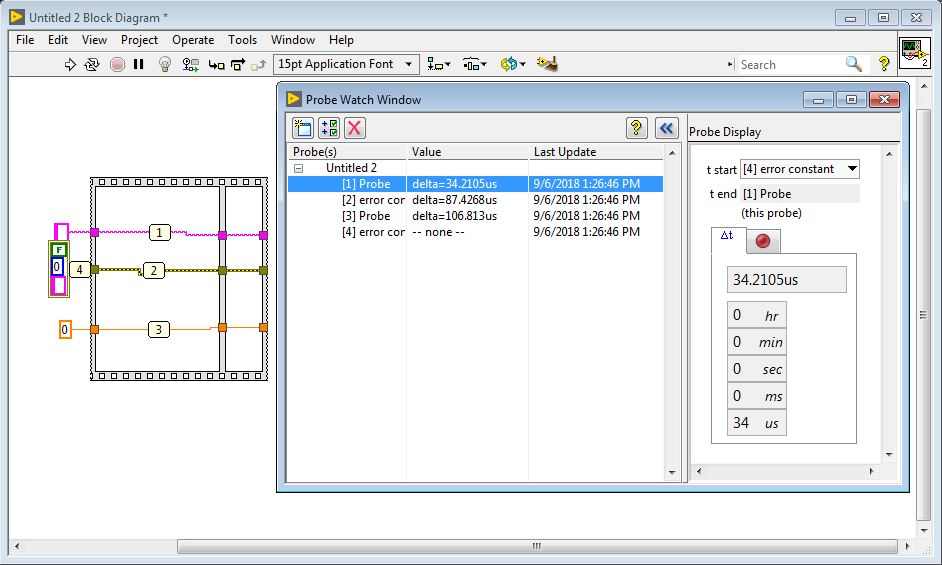