LabVIEW freezes when taking a measurement from second NI-9214 module

LabVIEW freezes when taking a measurement from second NI-9214 module

As the title says...  I encountered a strange issue when attempting to read values from the second NI-9214 module.

Even while LabVIEW is frozen, I can read the 2 NI-9214 modules via MAX.  The measurement VI is shared between all measurement modules (9205, 9208 & 9214).  The VI is dynamically called as a reentrent function.  Of course, there are different DAQmx functions called within based on the type of module.  Although unimportant information (at the surface), the 2 NI-9214 are located in slots 3 & 6.

I checked multiple times (MANY) that the device in is not the same for both calls to the dynamic VIs.  They ARE different and the appropriate values.  Every timed-loop has a unique name.  On the surface, everything seems fine.  I am starting to think that I've uncovered a strange bug...  I can't believe no one has implemented a solution like the one I am working with, so the bug has a low probability.  In my mind, at least.

Now for the screenshot...  The code is very simple...  Nothing fancy..  The identity of the device has been removed to protect the innocent.

As can be seen, it was possible to read the device using MAX while LabVIEW was frozen.  Ignore the very large values for the thermocouple... 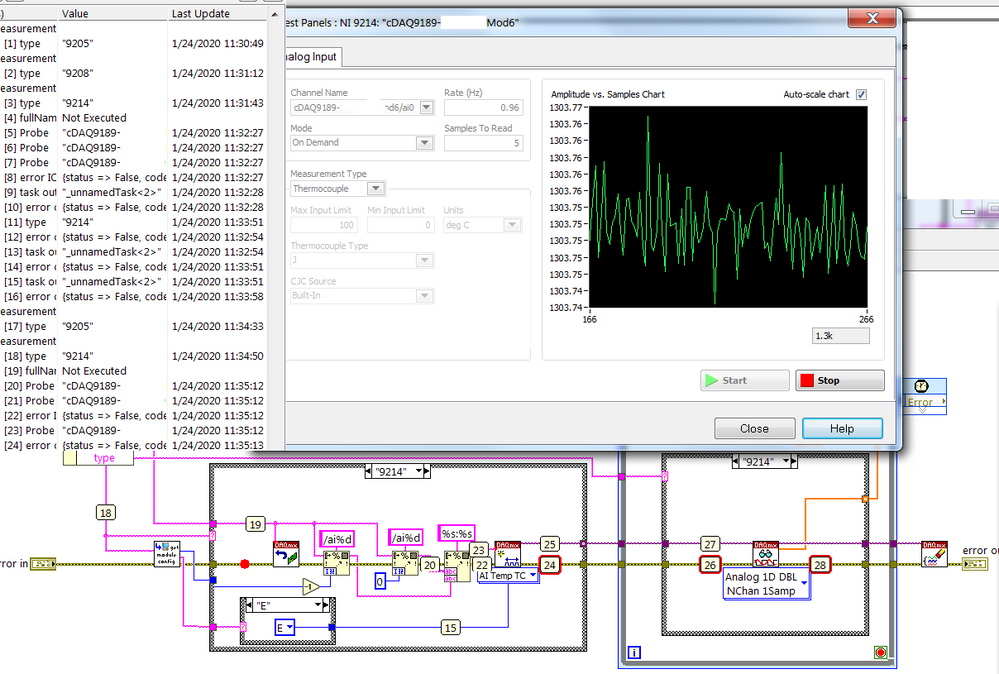 Re: LabVIEW freezes when taking a measurement from second NI-9214 module

Re: LabVIEW freezes when taking a measurement from second NI-9214 module

I discovered that the cDAQ cannot process too many modules concurrently.  The solution was to include a semaphore.  It now works well.