I am trying to use the DBC API, Function called like below:

When I call the DLL, there is a structure:

There is another  Message structure to the above Signal:

I've tried to solve it like attachment，but the program will crash.

How to create struct “DBCMessage” ，any good suggestions?  Thanks a lot.

What is "the DBC API"? Googling that function call doesn't give any results (besides your post). Is it the XML\DBC API?

How do you know? Does it work when it's an empty array?

Did you have any success with this DLL (other functions)?

+ Are you sure the calling convention is correct?

+ Are you sure those inputs are char[] and not char*?

+ Not sure if those char[] should have a size I32 before them.

+ You don't set nSignalCount to the size of the signal array.

+ You don't set nSize to the size of <what is should be>. Could be size in bytes of nSignalCount of the size of the entire structure?

As long as more then 2 or 3 of those items are uncertain, you have to find a way to rule them out one by one...

There are many people around these boards who understand C-family compiler nuances much better than I.   I can suggest some possible issues, but am ill-equipped to know the specific solution.

There can be an issue where C-like compilers may choose to align struct fields on 16-, 32-, or maybe nowadays 64-bit boundaries.  So when a DBCSignal has a 'char strComment[201]' field, it's possible that the compiler will set aside 202 or 204 bytes for that field to maintain alignment in memory.  Same idea holds for other fields potentially.

It can be difficult to know on the face of things *exactly* how many bytes a C-family compiler will use for such a struct.  It can depend heavily on compilation options.

The really tedious thing I've done in the past is to make a LabVIEW u8 array that's bigger than the largest possible struct size and feed *that* (as pointer or handle) into the dll.  Then I'd do some tedious trial and error where I attempt to populate the u8 array that could represent each field according to different possible candidate alignment settings, observe the results, and start figuring out the actual memory layout of the DBCSignals struct within the compiled dll.

You've *gotta* get the DBCSignals nailed down before you even consider tackling the DBCMessage which contains a large array of DBCSignals.

My very speculative guess is that the first field of DBCSignals where you need to start guessing much about size is 'bool is_signed'.  I'd further advise that you make sure your char[] arrays are populated with NULL terminators (hex 0x-00) in their last element, maybe also in any extra bytes of padding you allow for alignment.

And that's pretty much all I can tell you.  If a more knowledgeable poster shows up, believe them over me.  Good luck!

As mentioned by another poster there, padding is an issue. However, perhaps the biggest problem you have now is that Array to Cluster doesn't know how many elements should be in the cluster - it cannot know the size of the array. It defaults to 9 elements (that's arbitrary), and has a maximum size of 256 elements. You could create two clusters of 256 elements and bundle them together to get a cluster containing 512 elements.

Hi there, I have not tried this but you may find this example code from "Jolt" useful here:

Universal Cluster to C Struct with Endian-ness and Padding

Hi, wiebe@CARYA.Thank you for your reply.
Actually ,I'm writing a VI to anayse the DBC file (CANbus),like Vector and NI. But what we use is our own hardware.
I've realized it's a data structure alignment and padding problem. It ' s hard for me（neophyte） , but I ' ll try. 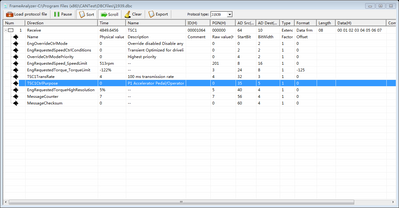 
Hi there, I have not tried this but you may find this example code from "Jolt" useful here:

Universal Cluster to C Struct with Endian-ness and Padding