For the past 20+ years with this wonderful and reliable spectrum analyzer model (anyone here remember those HP856x series spec-ans?) it has given me much joy and great pains all the same. Joy for its extremely reliable and accurate measurement with noise floors many equipment (even modern ones) have a hard time approaching (-94dBm/1MHz are you kidding me?) Pain for it's a pain-in-the-rear for acquiring or saving those wonderful measurement to share to the world (or at least to the daily engineering dev meetings) ever since floppy disks and floppy readers succumb to USB thumb drives. The E444x series spec-ans has been the workhorse at all the high-technology engineering labs I have been fortunate enough to have worked for and for exactly the reasons I mentioned above.

As an RF engineer you soon realize the problem. How to save those nice spectrum data you just spent hours setting up and the vaunted "eureka!" moment has already passed. Now we need proof of your hard work. A floppy disk? nope. A USB thumb drive? nope. A camera phone? Maybe at unclassified engineering spaces.

The only other option left is to pull the trace data through the GPIB interface - if you can figure out. But you still only get the trace "data" - tabular numbers - which means you still have to pop open Excel to create your plot. But that plot is missing lots of metadata - the X and Y axis are missing and is their scales. RBW/VBW/AVG? forget it. All you get is the "trace data" or just the Y amplitude data. You can work out the X axis start and stop frequencies with a little VI magic but who's got the time?

Presenting the E444x Trace Capture tool that I cobbled together from VIs I found here and probably LAVA - author's name attributed if known. This VI tool is just a trace capture tool but it adds the X axis information into a CSV text file you can easily drop in Excel. There is a "screen" capture tool I created in a separate post for those folks just needing to take a snap of the spec-an display to a GIF file. 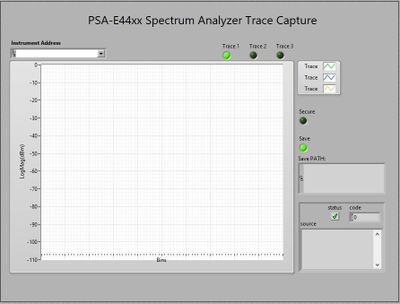 You are able to capture each or all of the E444x traces (3) to one CSV file. The VI uses native NI-approved E444X plug-and-play drivers shown here to query the X and Y data from each trace selected.

I am using LV 2018 but I saved the source code to be compatible down to LV8. Please install the PSA/ESA E444x plug-and-play (project style) driver from National Instruments Instruments Driver Network (IDN) and drop the folder into your LabVIEW instr.lib sub-directory.

As I have mentioned in my previous post: https://forums.ni.com/t5/LabVIEW/Agilent-Keysight-PSA-ESA-E444X-Spectrum-Analyzer-Trace-Capture/td-p...

There are two ways to capture the PSA/ESA E444x measurement trace(s). One is obtaining each trace X & Y data as I previously posted. Another is just taking a screen capture. This is the method in this post.

If you ask me how could something be so simple as saving the screen to JPG or GIF or BMP (as in modern test equipment do nowadays) over the GPIB interface not implemented? If you remember, the PSA series was designed in the 80s and came on the market (I believe) in the late 80s or early 90s as I saw a brand-spanking-new "Agilent" PSA E4440 at my first RF engineering lab among a sea of HP 856x spec-ans.

Those days were all floppy disk based and all PC workstations had floppies. There was no need for GIF or JPG (is it even invented in those days?) over GPIB. Now we have no floppies at Target or Walmart. You can probably still get floppies at eBay or at a local flea market but do you have a floppy disk reader on your PC workstation? Probably not.

So here is one solution I cobbled up to work nicely. I combined two methods to make this work from a couple of posts here and LAVA. The first suggestion is to use SCPI commands over VISA calls to save the screen into the spec-an internal HDD:

This method is suggested by many vets in this forum and at LAVA. I added the PSA-ESA "OPC?" sub-VI to guarantee current SA operations have completed before moving on to next SCPI command as I have noticed several instrument errors whenever I was doing these without querying OPC?.

The second step is actually moving the saved screen data (not yet GIF mind you) over the GPIB and into your workstation filesystem as a GIF and a nice graph that looks exactly like your SA display.

The "GIF file format LZW decompressor to BMP picture format" sub-VI is courtesy Mike Schroder. The sub-VI that converts the raw screen data (binary) to GIF format is the real magic. That sub-VI also saves the processed GIF file to your default LabVIEW data directory. The complete file path is displayed on the GUI front panel.

I merely use the LZW decompressor so I can have a BMP to display on the front panel of GUI - nothing more - since no support for GIF in the Graphics & Formats function tools.

If your setup is working the VI should (in a few seconds of parsing the internal display) display exactly as the E444X screen verbatim: 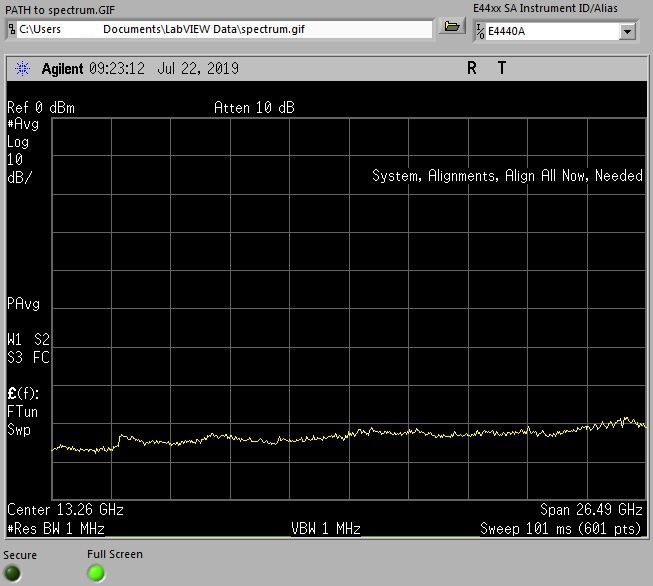 Did you notice the VI saves the screen capture automatically in the default LabVIEW data directory? The GIF is an exact replica of the SA screen. Select "Full Screen" or "Secure" if you don't want to capture the annotations for those classified frequencies and such. Oh and ignore the "System Alignments" notice. I need to get my analyzer back to the calibration lab 😉

hi sir, i know its been years since your last posts.
i am a intern working on project using labview together with E4440A Spectrum Analyzer

However, the labview example online about this kind of topics is extremely limited.... i dont even know how the program supposed to look like.
if you have past project or labview code similar to the projects i am working on, could you post them up too ! For reference purposes!