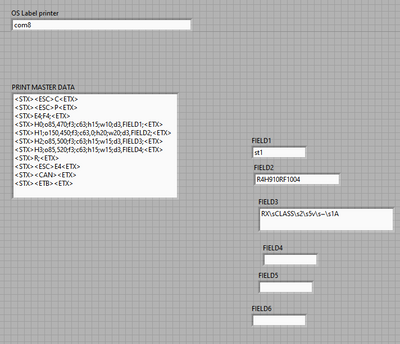 Hi I've been try to update a label takes text to one that displays text and a special character. The character being the dc symbol ⎓. I have LabVIEW set to Unicode = true.

Could someone give me any pointers on this

You need the NI Unicode VIs:

Just be aware that using Unicode in your code is unsupported, and for good reason.  I've seen the Unicode setting destroy VIs not meant to have Unicode in an irreversible way.  All you have to do is open a VI with Unicode in it and then open one that doesn't need it and you could be fetching an old version from your SCC shortly.

(Mid-Level minion.)
My support system ensures that I don't look totally incompetent.
Proud to say that I've progressed beyond knowing just enough to be dangerous. I now know enough to know that I have no clue about anything at all.
Humble author of the CLAD Nugget.
0 Kudos
Message 3 of 9
(636 Views)
Reply
Solution
Accepted by topic author ianchisholm

In addition to the UseUnicode="True" setting in labview.ini, the text attribute "Interpret As Unicode" must be set to true.  Note that this is like other attributes in that it can be applied chr by chr.  When you use the property

, it only applies to the selected text, not the entire string.  See attachments

Thanks zou billko for the great info and thanks to  paul_cardinale for the vi's this looks like what I'm after , i need to check the fonts on the printer can handle the graphics.

Hi Paul, Sorry to reopen a solved page (not sure if it should be a new post?) with regards to the software example you supplied that looked to be bang on , an issue I believe I'm having now is the printer (intermec pc43t) I believe only accepts 8 bit utf encoding and the out put of the vi is 16bit. Printer is ok up to LATIN SMALL LETTER Y WITH DIAERESIS (U+00FF) but falls over at LATIN CAPITAL LETTER A WITH MACRON (U+0100) and above. for testing i was using the copyright symbol U+00A9 and the dc symbol U+2393. Is this code able to convert to 8 bit utf. I tried converting to 8 bit but have struggled with it. i was looking to try the utf 8 coding below

any help would be appreciated

The functions you will most likely find useful are:

Note however that strings constructed with the functions I previously posted will most likely result in text that is not purely UTF-16, but rather a combination of ASCII and UTF-16.

Hi Paul thanks for the collection there's a lot to learn there, I've tried to amend the 16 bit to 8 bit using the


Hi Paul thanks for the collection there's a lot to learn there, I've tried to amend the 16 bit to 8 bit using the

The VIs do what there names imply:

Note: Post VIs, not pictures.  No one will try to debug a picture.