Simulate Your Robot in LabVIEW for FRC!

With LabVIEW, you can get a early start learning LabVIEW Robotics for the FIRST Robotics Competition by using Robot Simulation to program a predefined robot without having an RT (Real-Time) roboRIO target. This allows multiple developers to concurrently create and test LabVIEW code without requiring each developer to have access to the hardware. Programming is the same, except only the predefined Actuators and Sensors on the simulated robot are supported. By exploring the pre-built LabVIEW Robotics Simulation projects, you can discover aspects of LabVIEW Robotics applications and learn how to start your own LabVIEW Robotics Simulation project. The intent of the Simulations are to start learning LabVIEW for FIRST Robotics Competition, but you do have the ability to move simulation code to an RT roboRIO target and run on it on a real robot. 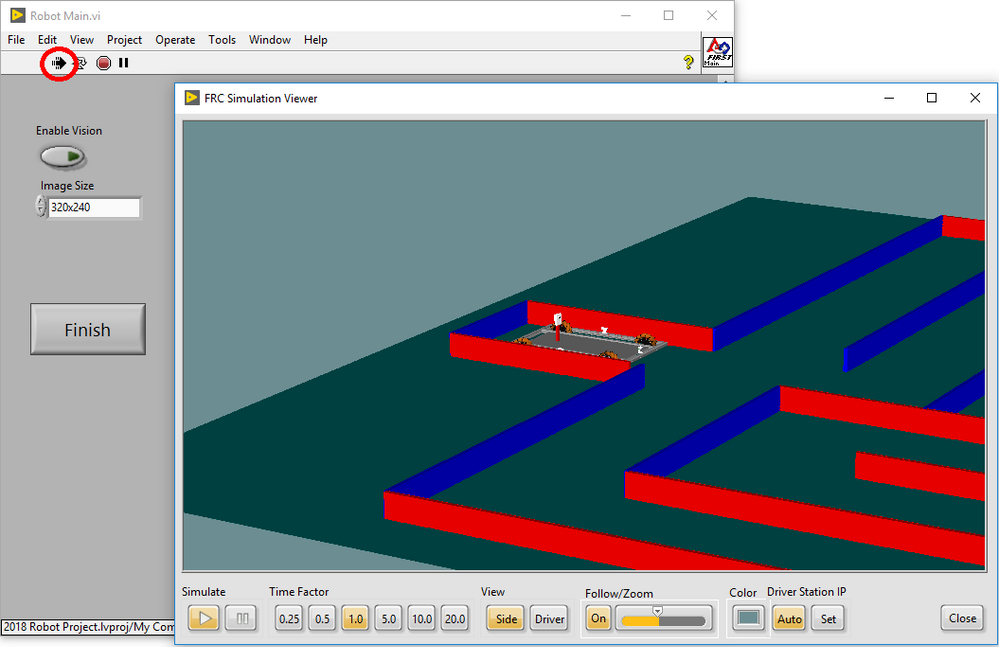 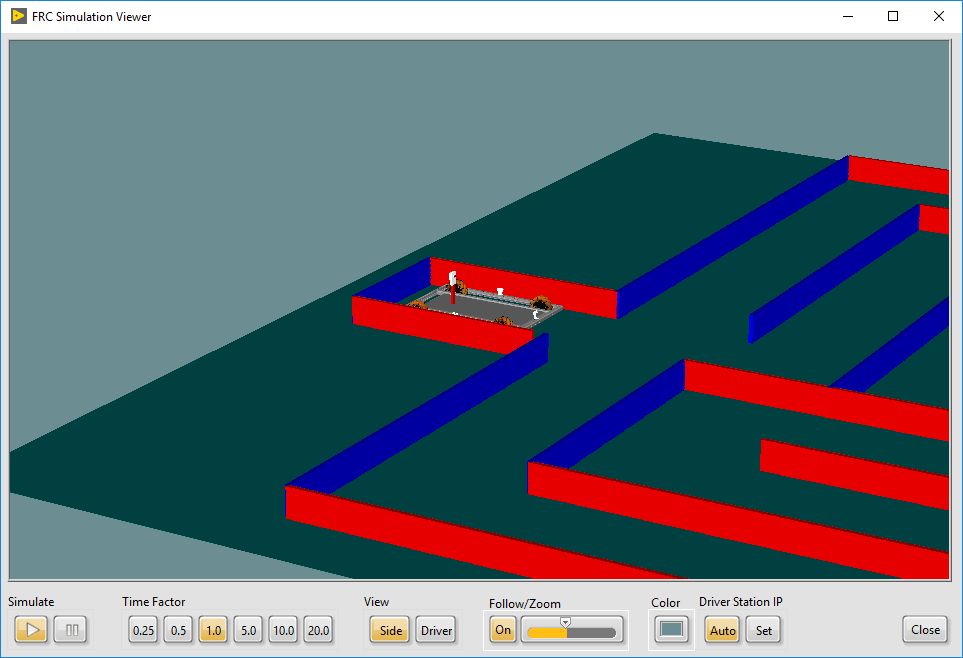 Aside from Teleoperation of the simulated robot using the joystick, there are several options in the FRC Simulation Viewer to help customize your simulation environment:


The simulated robots are predefined - they cannot be changed.  But they are the same as real robots in that they have sensors and actuators attached. By default, each project includes code to drive and control the robot.  Beyond that, you may add your own code to make use of additional sensors and actuators included on each robot.  This section includes the following topics:

Adding Sensors & Actuators to the Simulation

The Robot Simulation Readme.html is unique to each project. When modifying a simulation project, check this file to ensure that you have selected the correct channel to communicate with a sensor or actuator. Below is a list for the Mecanum Maze Simulated Robot.

Supported Actuators and Sensors on the Mecanum Maze Simulated Robot


Actuators on the simulated robot

Sensors on the simulated robot

You will notice that the simulated robot includes a gyro. To add a gyro to the Maze Simulation, you can take advantage of some existing sample code and the Custom tab on the simulation dashboard. Once you get code working in simulated mode, the same code can be built for a real robot.


Enabling Vision in the Simulation


By default, image acquisition is turned off in the Simulation, as it takes more of the CPU processing power to enable Vision. This section will cover how to enable Vision in the Mecanum Maze Project.


Building the Simulation for the roboRIO

hello, urgent help, how can i obtain x  y coordinate colour detection(output) into an angle for ev3 robot.

basically i have a x y coordinate value that i obtained from a picture and i am trying to use a vision camera to control robot to move the the object.

as of now i am stuck, can anyone help me please