The Arrange VI Window plugin arranges front panel controls based on the connector pane. It also resizes and repositions both front panels and block diagrams to minimize white space and position windows near the upper left corner of the screen. Windows are sized and positioned based on the size of the monitor. If there are too many items, only a portion of the content is shown.

To install this shortcut, unzip the attachment in one of the following locations (no LabVIEW restart required):

This shortcut is intended for use with LabVIEW 2014 through 2018. If you have LabVIEW 2019 or later, this shortcut is built-in; for those versions of LabVIEW, you can also activate it for Front Panels by pressing Ctrl-U.

This shortcut was inspired by the following: https://forums.ni.com/t5/LabVIEW-APIs-Documents/Quick-Drop-Align-front-panel-controls-to-connector-p...

The following is an example with front panel controls and indicators laid out inconsistenly with the connector pane, and with a lot of unused space on the sides. 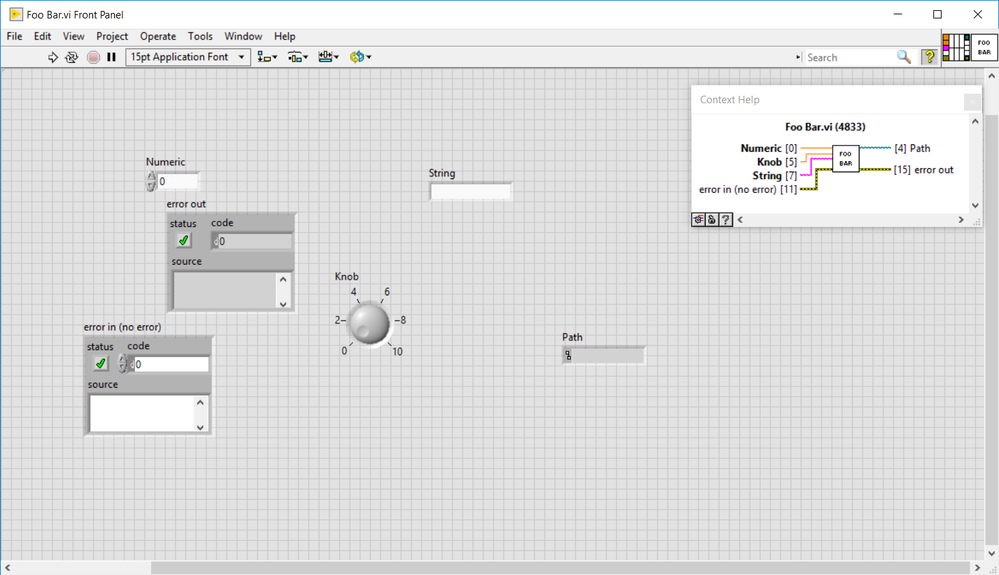 With this plug-in installed and the default shortcut assignment, pressing Ctrl-Space, Ctrl-F results in the following: 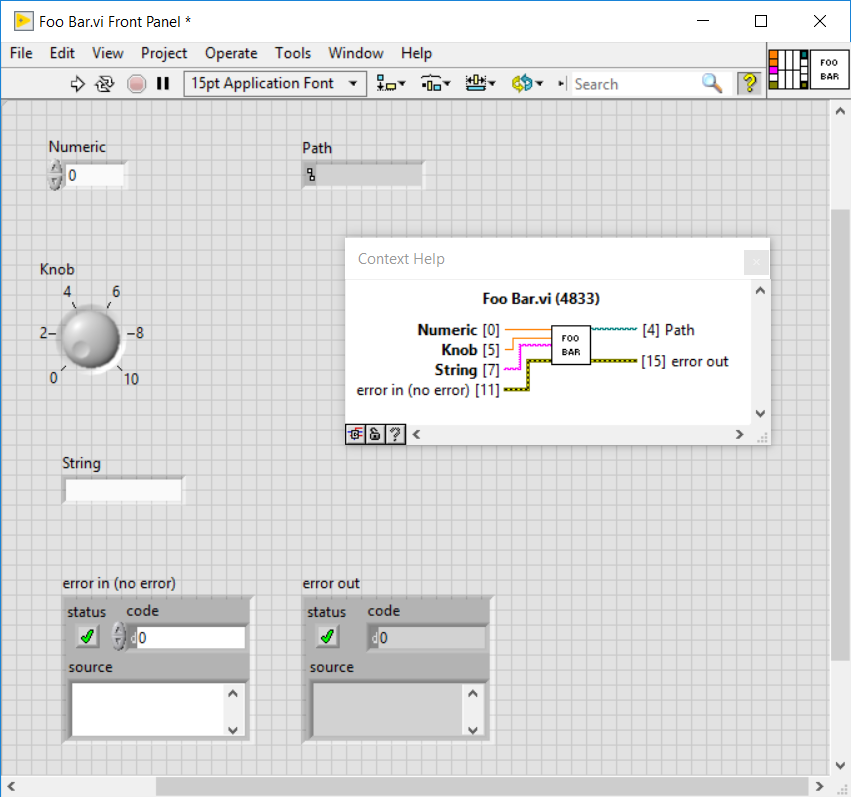 You can use this plug-in with front panels of globals and controls in which case the plug-in only resizes and repositions the window.

To continue the example, assume that the starting point was the following block diagram. 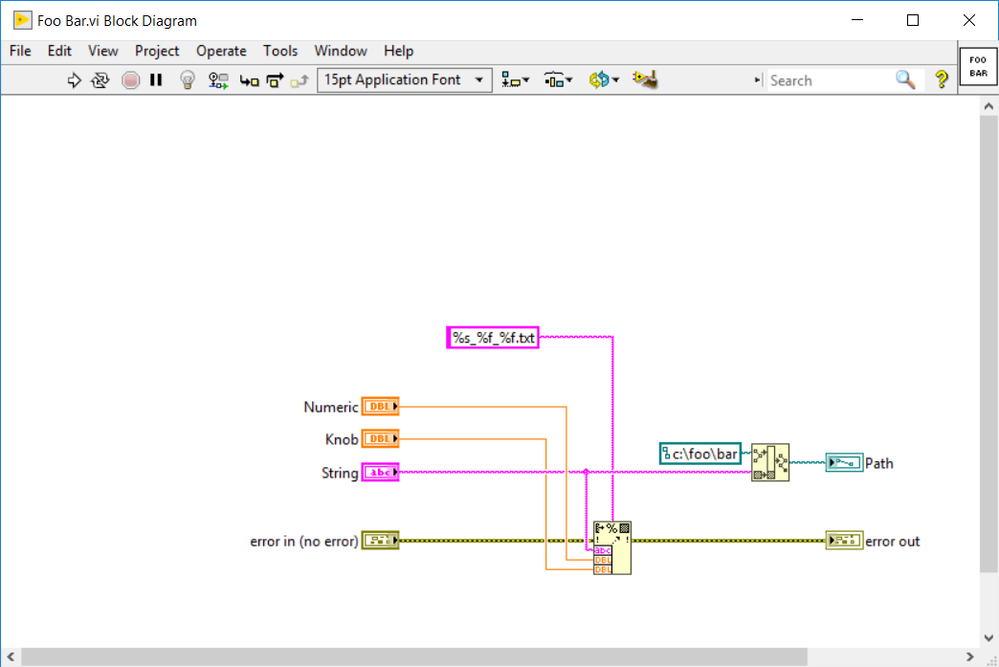 Note that all items are moved together toward the upper left corner of the window and the height and the width of the block diagram window are sufficient to accommodate all the items with reasonable margins. In addition, the width accommodates all toolbar items.

You can control certain aspects of operation of this plugin by setting the following LabVIEW.ini tokens:

To install this shortcut, unzip the attachment in one of the following locations (no LabVIEW restart required):

Are there advantages/disadvantages to installing in either of the suggested locations?


To install this shortcut, unzip the attachment in one of the following locations (no LabVIEW restart required):

Are there advantages/disadvantages to installing in either of the suggested locations?

Do you want these plugins to be available for all users or just the current user?  Also some users won't have write permissions to places under Program Files and may only be able to install them under the location for just their user account.

Does the plugin align controls/indicators in a way which satisfies "VI Analyzer"?

I can't find anything that explains what "VI Analyzer" is looking for in terms of control/indicator alignment to the control-grid. Its just never happy!

There are several tests that ship with the VI Analyzer Toolkit that relate to front panel control position. I assume you're referring to the 'Control Alignment' test, and yes, this plugin will arrange your panel in such a way that the Control Alignment test is satisfied.

See here for a list of all VI Analyzer Toolkit tests.

A checkbox was added to the Control Alignment VI Analyzer test for LabVIEW 2019 to make the test work better with Arrange VI Window Quick Drop. I use that test configured as shown below: 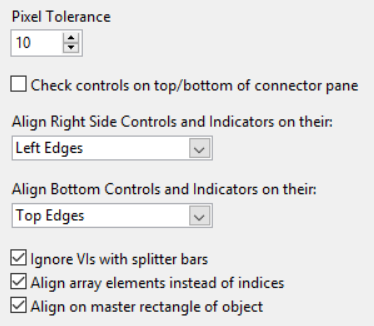 You may get a false positive if you check both the "master rectangle" and the "top/bottom" boxes when one or more controls are type defs. NI VI Analyzer R&D team is aware of this.

Is there an easy way to make this resize a window but NOT move it to the top left corner? I work on multiple displays, and it's fantastic that it fixes sizing issues, but it also shoves it to the wrong screen and I have to bring it back every time. I'd rather there be an option to keep the top-left corner where it is, and JUST resize it.

Heads up! NI is moving LabVIEW to a mandatory SaaS subscription policy, along with a big price increase. Make your voice heard.
0 Kudos
Message 9 of 45
(5,396 Views)
Reply

Why are you saving your VIs on a non-primary monitor? If somebody else opens your code and doesn't have your same monitor setup, it will be inconvenient for the VIs to not open in the top-left.

But to answer your question, there is no built-in way to disable this behavior. If you want to modify the code yourself, check out:

That's where the BDWin.Bounds property is set, and you can add a little math in there to keep the calculated bounds, but instead of using a new top-left on the primary monitor, use the top-left that the window already had.