Hello everyone,
Newbie here, I have posted the same topic in the Labview board and removed later due to several mistakes I made in the question and my reply. Also, I probably should post my question here on the hardware board instead of Labview. So this time, I am trying to make a better job of asking a question, since I got blamed last time due to lack of information.

I have just received a cDAQ-9184 and three modules, NI9263, NI9201, and NI9205. I want to measure soil samples' resistance by using a plexiglass box with two electrodes on the two ends ( Miller soil box). After I have been playing with cDAQ-9184  for a week, I had two plans for this task.

1st plan, connecting my soil sample with a known resistor (5.6 K ohm) in series, and output a constant DC voltage (10 V) by using NI9263. And measure the voltage across the soil sample and the resistor by using NI9205, so I can calculate the soil resistance by R1/R2=V1/V2.

For this plan, I have finished the vi ( very simple, mainly using DAQ assistance) and tested it, which is working. I used a FLUKE 743B process calibrator ( multimeter) to check the divided voltage for soil sample and resistor, which gave me the same measurement with the LabVIEW. I also tried to measure the current by connecting the multimeter with soil and resistor in series, the current measurement is reasonable too. But the problem is the results by using this method is different with the expecting value from another device called NILSSON soil resistance meter 4000, which we usually used as a reference value.

2nd plan, connecting my soil sample with a current analog input module such as NI9203( need to order)  in series, and output a constant DC voltage (10 V) by using NI9263. Then measure the voltage across the soil sample by using NI 9205, so I can calculate the soil resistance by R=V/I. For now, I can use the FLUKE 743B process calibrator ( multimeter) as my current measurement device since it has the data logger's function. But I don't have an AC DC adapter ( cost almost $ 300 USD) for this FLUKE 743B, and the battery only last 8 hours. So I will probably order a NI 9203 ( around $ 600 USD) for current measurement.

Does anyone have some suggestion about designing a system can measure the varying resistance? 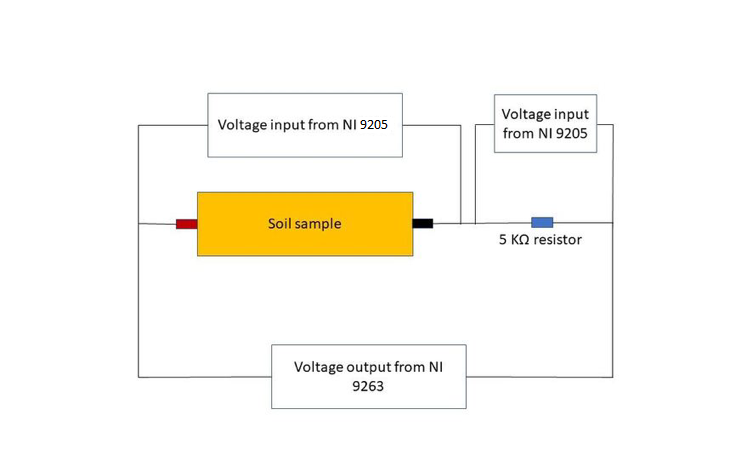 Re: Measure soil resistance by using cDAQ-9184 with analog output and input modules

It works with a 97 Hz square wave   , so better don't switch to DC measurements! At these currents and voltages you get electrolytic reactions ...

And the soil box uses 4 wire resistance mode.  So I would also use 4 electrodes ... (two elctrodes at both ends?)

Start with a vi (look at the examples) to generate a 97 Hz sine with your 9263 and feed it into your 5k resistor.

add a second loop (or vi) to measure the voltage across that resistor. again the examples should guide you 🙂

configure it for 97 Hz Sine and run it.

While it running you can use the vi I add, it's a Q&D mod of an example ( press Ctrl to add more channels while browsing in the Physical Channel control) 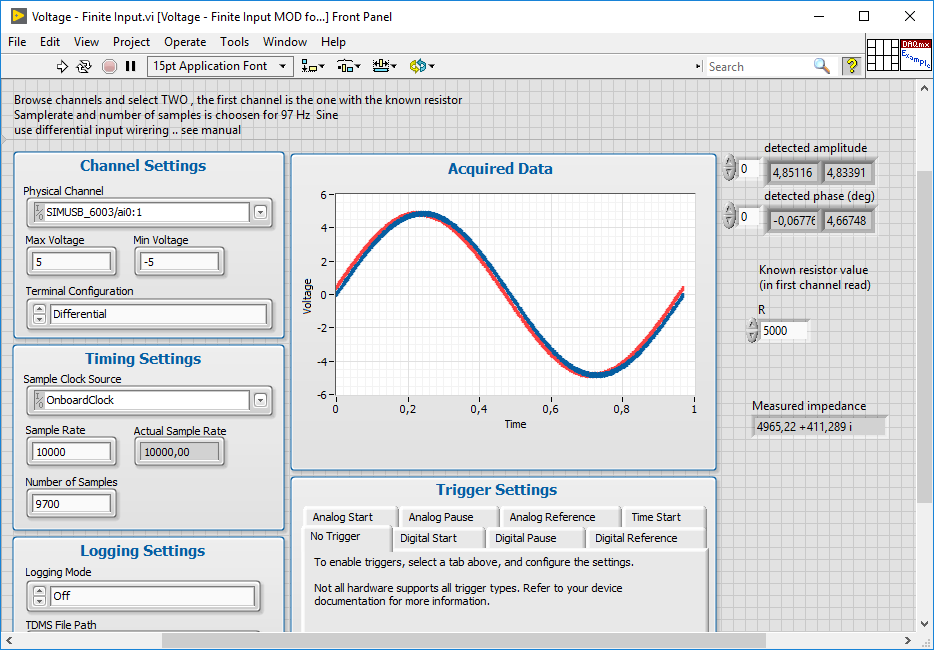