So I have been working on modifying an existing project to make it suitable to run simulations with, instead of it requiring hardware connected through a MyRIO. The problem is however, shortly, all the functions have disappeared in a specific VI within the project, and I can't seem to solve the problem. This is what my function list looks like: 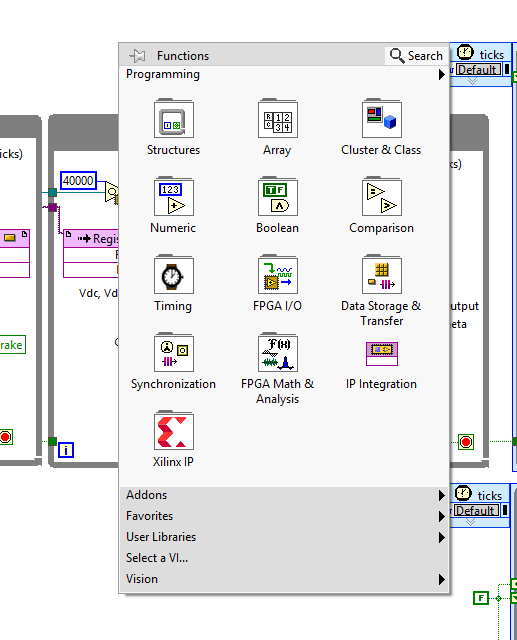 What I've noticed so far:

- In the screenshot shared below, i have encircled two places which seem to display an error whenever my functions are working as intended. This time, they don't show an error and my functions aren't displayed. Whenever the error is shown, supposedly, the encircled wires aren't of the correct data format to connect them to the following function.

- The issue seems to be quite random in when it appears. Most of the time, when opening the project and relevant VI, my functions are hidden, but sometimes it isn't, as in the case mentioned above.

Does anybody have an idea as to what's causing the issue?

The main reason behind this is that you when you try to program a FPGA vi (in your case it is MyRIO), you will only get those functions which are compatible with LabVIEW FPGA. You can use all the functions when you are programming a RT or Host vi.

Hmm, so what would you say that the recommended course of action is here?

Do I need to have a MyRIO connected to be able to use the missing functions?

It really doesn't matter wether you connect your RIO device or not. You can only use the functions that are available to you for your FPGA vi. If you want to perform some advance function which are not included in the functions pallete in FPGA vi then you need to transfer your data to Host vi (via shared variables or FIFO) then use the other functions which you want to use.