Options
When the snippet feature was introduced in 2009, some people thought that this would be the end of the Code Capture Tool (CCT).
Well, they were wrong. It's back. Bigger, better and cooler.
For those who don't know the CCT, it's a small utility which you can use to make screenshots of LabVIEW code, either for sharing or for documentation. You can see here  for more details.
For those who already know it, now's the time to introduce the new features. The following video shows them nicely, but to recap:

Here's a video demonstrating the new (version 2.0) features: the video might take a while to load but it's worth the time
You can download the Code Capture Tool 2.0 at LAVA.
Here are a series of videos on the CCT (1.0 and 2.0).

Here are some captures with these version, showing both the annotations and snippet features: A capture with LabVIEW 2009 with an annotation.

A capture (no snippet) with annotations and arrow pointers 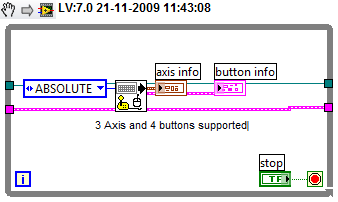 A capture created with  LabVIEW 7.0 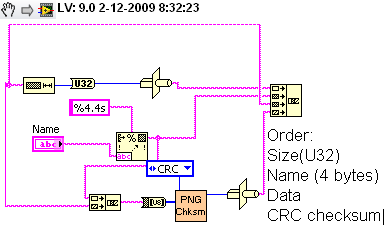 A snippet with annotation.

A big thank you to Darin (

)for finding out how to make a snippet!

You are more than welcome, great job with the CCT.  I have a few more tricks up my sleeve that I'll try to organize and share so the CCT stays ahead of the game.  In another forum I have given code to Jim (jcarmody) to convert PNG pictures containing snippets on a block diagram into the code itself.  This gives a very nice method for users of older versions to use the snippet feature.  He should have a RCF plug-in soon for that.  It should be easily converted to a VI for the Tools menu as well (perhaps as part of the CCT itself).

I have also worked to add autoselection of controls linked to property nodes as well as adding controls when a wired terminal is selected but not its source (more like snippet behavior).  I have also experimented with including subVIs.  Still a work in progress.

Minor note: I do like the dashed frame that LV puts around snippets.

Minor note: I do like the dashed frame that LV puts around snippets.

Yes I like them as well, it's however something I am certain about if I should add this frame around an FP part of a captured snippet.

Wow, that looks really cool. Everyone should try it. 😉

I agree about the frame for the snippets. If I would be using them, the frame provides a much more visible sign than the header glyph.

Incidentally, while my name appears in the first post, the actual work on this version was pretty much all Ton's. My role was mostly in feedback and doing some behind the scenes stuff.

Wow, that looks really cool. Everyone should try it. 😉

I agree about the frame for the snippets. If I would be using them, the frame provides a much more visible sign than the header glyph.

I filed a feature request.

[...] In another forum I have given code to Jim (jcarmody) to convert PNG pictures containing snippets on a block diagram into the code itself.

I've posted the plugin here.  I took a different path than you did in the code you sent me, but I couldn't have done it without your help.  The plugin acts on one snippet at a time, rather than all snippets in a VI, using the reference to the selected decoration (snippet).

Jim
You're entirely bonkers. But I'll tell you a secret. All the best people are. ~ Alice
For he does not know what will happen; So who can tell him when it will occur? Eccl. 8:7

Here's a VI for the Tools menu.  It will convert whatever snippet is selected.