When interfaces were first introduced, I thought I recalled seeing a demo where there was a menu option that allowed users to create an "Interface for Actor", but I never saw it during development. In fact, I even recall someone asking about it in another post, but nothing ever being resolved. This option would not only add the interface file, but place it within a lvlib file that also contains a virtual folder for actor messages.

Well, a couple of us at Zyah Solutions were poking around recently and, low and behold, the code for such an option actually ships with LabVIEW, but for whatever reason, the GProvider INI file to enable it doesn't. Well, I created an INI file to enable it and it seems to work as expected so I'm sharing it here in case other people would find this useful.

Just put the attached file in "[LabVIEW Path]\resource\Framework\Providers\GProviders" (LV2020+ only), restart LabVIEW, and you should see the following option if you right-click your target: 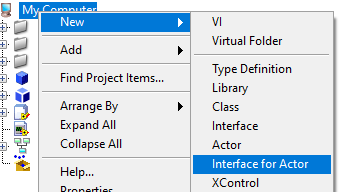 I'll probably put this in a VIP later to make it easier to install, but figured this is useful just as an INI file for now.

Enjoy and let me know if anyone finds any issues with it.

I'll try this out soon and report back if I see anything weird.

You've got to be kidding me.

I don't recall who wrote the G code (I think Allen), but I knew it existed. At some point I must have patched my personal system and just forgotten to submit the config file for the rest of you. And then I just never had cause to use it for any work projects.

Have you told NI so they can enable it in the newer versions?

I let Darren know about it so he's looking into it.


I don't recall who wrote the G code (I think Allen),

I don't recall writing that code, either.  Interfaces came long after I stopped working on the provider.  OTOH, it would have been stupid easy to write - just copy over much of what I wrote for adding actors.

Maybe the old girl wrote it herself?  You did tell me once that the compiler had long since passed the point where it was smarter than the people who worked on it...