Have any old-school floppy drives lying around? Get hacking! Transform them into an electronic orchestra!!

This project uses one myRIO embedded controller and a series of floppy disk drives. The myRIO effectively plays the drives like musical instruments, by stepping the disk drive's integrated motors at specific frequencies.

Since the original posting, I have scaled the project from a quartet into a 16-piece orchestra!

By referencing the following table, I developed a LabVIEW VI (which runs on the myRIOs real-time processor) that converts a musical note (such as a C4) in to a wave frequency. For example, the note C4 would be a frequency of 261.63 Hz. This frequency value is then passed to the myRIOs on-board FPGA, which generates a digital pulse train used to control the floppy drive motors. To generate the pulse train, I used LabVIEW to create a simple FPGA personality that inverts the digital true/false within a loop, but I dynamically set the loop timing to be half the period of the requested frequency value.

The next task is to change the motor direction when the floppy drive's read head reaches the end or the start of the disk. To ensure that the myRIO never tries to drive the read head beyond the start/end of the disk, I implimented a custom counter on the FPGA, to constantly monitor the position of the read head and invert its direction as appropriate.

Floppy disks are made from a thin piece of plastic coated with a ferromagnetic material, which is magnetised to retain data. More specifically, the disk is divided into 80 data-tracks arranged in concentric circles, like the rings of a tree. 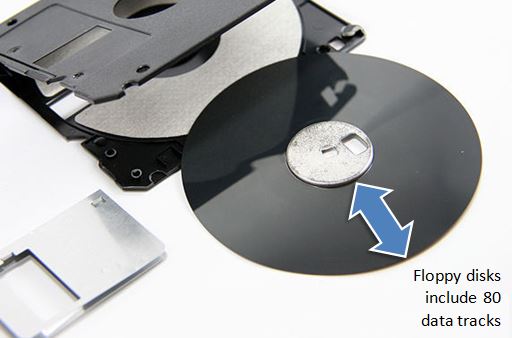 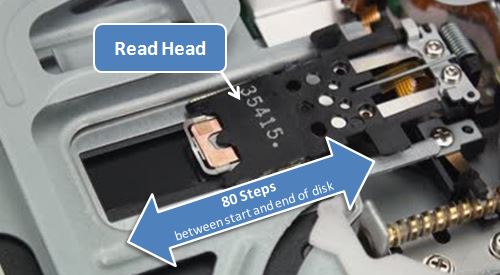 Finally, after the myRIO has finished playing a song, the read head must be return back to the starting position, by driving the motor back the remaining steps. This can be done quite simply using the custom counter that is already created.

The ability to create/duplicate many parallel tasks is one of the major benefits of FPGA. By using LabVIEW FPGA, I only had to write ONE of the customer counters for ONE of the drives - I could (literally) copy 'n' paste the code to take control of the remaining 15 drives. Each duplicated counter would carve out its own circuit within the FPGA - allowing each counter to run in independently and in parallel.

Now that the drives can be sent a tonal frequency and produce a musical note, the next part of the project was to teach the myRIO some tunes!!

System Explanation (recorded while a quartet):

To teach the floppy drives to sing, I chose to use MIDI files. To quote wikipedia: "A MIDI file is not a recording of actual music. Rather, it is a spreadsheet-like set of instructions".

A MIDI file has up to 15 tracks of messsges, each representing a seperate instrument within the song (e.g. piano, syth, gutiar, bass, etc). Each MIDI message includes channel number, the note to be played, note start time and note duration. These messages can then be turned into arrays of notes for each channel on the myRIOs realtime processor, which can then be passed down to the FPGA.

In order to make the device easy to use I wanted to have the myRIO read it's playable songs from a USB memery stick plugged into the USB port - to simply the process, I created a vi that converts MIDI files into an appropriate format for the myRIO.

The wiring requirements of myFloppyDriveOrchestra are surprisingly simiple, because each drive needs just two digital lines - one for step and one for direction. You also need to short the drive select pins and conected the ground pins back to DIO ground of the myRIO. The following image illastrates how to wire a "quartet" of floppydrives to the myRIOs integrated MSP Connector. To control a full 16-piece orchestra, you need to replicate this wiring on two MXP connectors on the reverse side fo the myRIO.

Each drive will also need 6 Volts for power.

Now that the embedded software (both real time and FPGA) is developed and the hardware wired, there is one final piece of the puzzle... the GUI (graphical user interface). To control myFloppyDriveQuartet (select the music track, start/stop the floppy drives, transpose music notes etc), I created two user interface options.

The Steps to Execute the Code.

My name is James Willis I'm a student from Cardiff University studying electrical and electronic engineering, currently on my placement year working as a Applications Engineer at National Instruments. If your interested in doing a placement at NI have a look at this page.

This is fantastic! Will definitely share this with my User Group tomorrow!