of their solar panel deployment mechanism for small satellites aboard a REXUS sounding rocket scheduled February 2015. We are the winner of the Student Design Competition 2013

We are proud and want to thank everybody who supported us!

CERESS is a support system for Experiments on sounding rockets within the REXUS program performed by DLR (German Aerospace Centre) and SNSB (Swedish National Space Board) for educational purposes. It provides the most important functionalities like regulated power supply, onboard data handling, command and control, real-time communication as well as interfacing the REXUS systems on the rocket and on ground. CERESS makes it easier for students to perform their scientific experiment aboard sounding rockets! 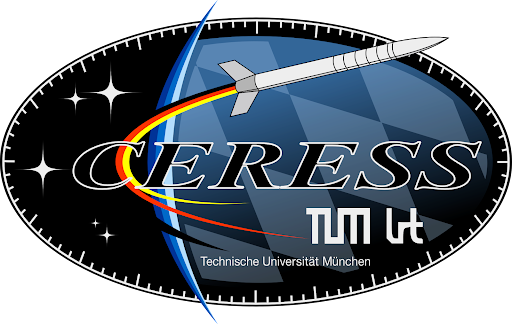 REXUS is a sounding rocket program with educational purposes. The used rocket is also called REXUS and provides the capability to carry up to 60kg or four student experiments to nearly 100km height. After a boost phase the rocket provides about 5 minutes of microgravity (“weightlessness”) and vacuum conditions. These conditions are declared goals to achieve with sounding rockets. The REXUS rocket is roughly 6m in height and has a diameter of about 35cm. The included Service System provides unregulated power, some signals and a serial interface for communication to the ground and vis versa. 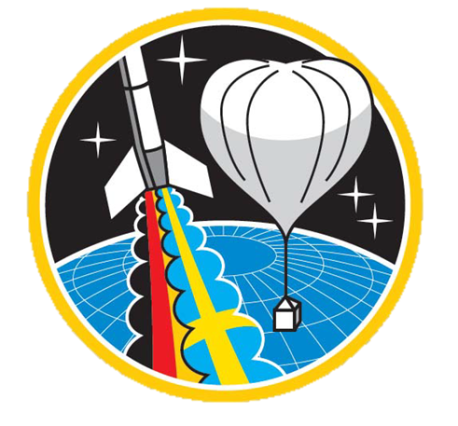 The analysis of previous sounding rocket projects at the Institute for Astronautics at TU Munich (TUM) has shown that an entire infrastructure had to be designed and built for every new experiment. The requirements of these experiment infrastructures are in general very similar; Including a regulated power supply, onboard data handling, command and control of the experiment, real-time communication as well as interfacing the existing systems on the rocket and on ground.

The main goal of the CERESS project is the development of a standard platform providing the most important functionalities, allowing future teams at TUM to concentrate more on their scientific objectives. Once verified on the first flight, all used hardware (e.g. Sensors) can be directly applied to future experiments. After recovery the onboard stored data, the telemetry data from CERESS and from REXUS service systems are merged into a data packet for distribution, analysis and outreach.

In addition to acceleration, angular rate, temperature and pressure sensors, a camera documents the progression of the experiment. Monitoring and control software on the ground enables a thorough surveillance of the experiment during the entire mission. Functions like remote control of the experiment, sensor- or time- based actions are provided. A visualization tool illustrates the rocket’s trajectory in a 3D simulation in near real-time and as post flight replay. This complements the “CERESS” project with a widely requested feature that allows the general public to access the fascination of REXUS (sounding rocket) experiments.

The also included rocket module provides many functionalities future teams demand on the rocket. The core of this is a sbRIO-9642 with an attached SD Card Memory Module (NI-9802) for data logging.

The implemented program takes care of all initializations, provides Telemetry (data stream from the rocket module to the ground), Telecomamnd (commands from ground to the rocket module) as well as time based events elapsed since Lift-Off and data logging issues concerning events and state transitions. Furthermore events can be triggered by reaching a certain measurement value or receiving a corresponding command.

All sensor acquisition is done using the FPGA like analogue inputs for Temperature, Voltage and Current. An implemented SPI was utilized for different digital sensor and is also capable to detect Interrupt-Signals, buffer and process them in correct order. Therefore only one SPI is necessary to gather data from multiple sensors with individual acquisition rates, which saves space and compilation time. Some digital outs were directly used to control a camera which brings back a spectacular video shot of the flight – filming the beautiful landscape of northern Sweden from the rockets perspective.

Different data rates can cause problems for data logging too. Without exact knowledge when which information was send to a binary file a parsing is completely impossible. To avoid such fatal cases, a protocol was set up to define which information was stored in the following bits then called “package”. This way additional information can easily be stored by defining a new package. Furthermore the full 2MB/s of the SD standard can be used due implementation on the FPGA and usage of an NI industrial rated SD Card.

In figure 1 you can see the CERESS space segment, ready for testing. 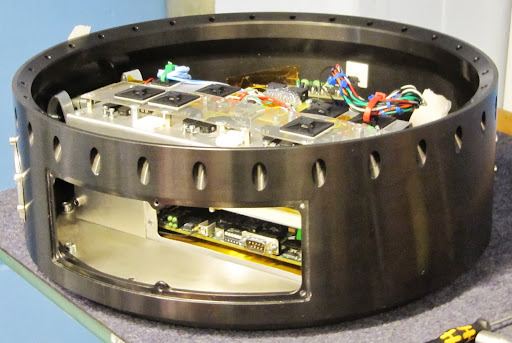 Beside the space segment the ground segment is a necessary part of every space mission, providing surveillance of rocket- and verification module (resp. future experiments).
The ground segment is designed as a client-server-architecture based on a MySQL database enabling the distribution of Telemetry/Telecommand-data over the Local Area Network to multiple PCs at the Mission Control Center of CERESS and future teams. Being aware of LabVIEW’s network-data-distribution capabilities, the decision for an independent MySQL database is based on possible connectivity of the ground segment to future clients, maybe not using LabVIEW. The backend of the ground segment is entirely implemented in LabVIEW, processing the Telemetry/Telecommands of the experiment and the tracking-data of the rocket’s flight and inserting it into the database. This data can than be made use of  by multiple clients on multiple computers for displaying experiment’s scientific- and maintenance data during flight. The clients of the CERESS mission are also entirely implemented in LabVIEW.

Figure 2 shows a screenshot of the groundstation using four monitors.

The Visualization Tool ViTo
To point out the possibilities gained by the CERESS ground segment architecture, the most complex data flow is the one for the flight visualization (see figure 3):

Like all clients, the Visualization Tool (ViTo) fetches necessary information from the database, processes it to create input for Google-Earth Clients and forwards it via ftp upload to a webserver, providing a near real-time flight visualization on the internet. At http://vito.ceress.de/ everybody was able follow the flight of REXUS 13 and 14 by an embedded Google Earth plugin and a live video stream from the REXUS Science Center (the place, where the experiment’s control consoles are settled during the flight). A twitter status bar allowed everybody to participate in the fascination of sounding rocket mission. 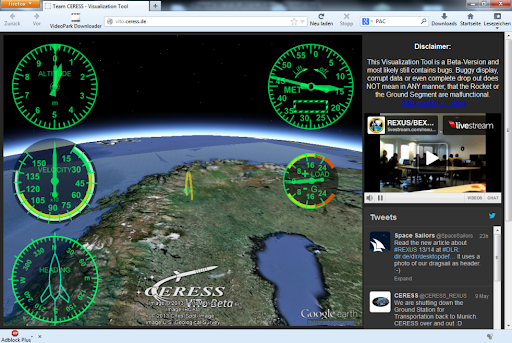 How the flight was

All sub-systems were tested at the flight aboard the REXUS 13 sounding rocket on Thursday, 9th of May, 2013 on ESRANGE in northern Sweden 200km beyond the Arctic Circle.

The flight of CERESS was a 100% success for all used NI Hardware and an 85% success for the whole project. All sensors were working correctly until a not yet exactly determined failure occurred during launch at one of CERESS’s three power buses. The power supply for all 5V sensors and the Camera got lost. During this phase very harsh conditions like 20 times gravitation and vibrations of the rocket booster occur. All other components stayed fully functional.
Nevertheless CERESS obtained very good sensor data from the remaining accelerometers and gyroscopes with outstanding sampling rates greater than 1000Hz (accelerometers) and 800Hz (gyroscopes).

How long it took to accomplish CERESS

The project takes part in the REXUS 13/14 program, which has begun with DLR’s call for proposals in October 2011 and ends with a final presentation at the “21st ESA Symposium on European Rocket and Balloon Programme and Related Research”. Taking into account the former LabVIEW expertise of the team, a steep learning curve was necessary. Developing and testing sums up to nearly 15 months (including software as well as all structural and electrical work). The LabVIEW documentation and course materials beyond Core 1 and 2 have been in extensive use and were great help kickstarting and later refining the LabVIEW development process during the project.

Next steps upcoming to the CERESS system

In future, CERESS will be used by future teams of TU Munich for their experiments aboard sounding rockets of the REXUS family. With every team new features and utilized sensors are supposed to expand the capabilities of the current system. Smaller and though more powerful NI RIO hardware will also enhance the use of all implemented software.

(In case somebody wants the software: Its attached to this submission. Don't hesitate to contact us for more information about it)

Why we used LabVIEW
The great advantage of LabVIEW for the CERESS team was the possibility to use one single development system. Beginning from data acquisition through the FPGA with the direct control of each digital pin (combined to a SPI, for example), analogue pins and the very accurate timing opportunities (the implemente 1µs timer, for example), continuing to the Real-Time Controlling Software up to the ground segment with its different processing, storing and displaying capabilities – all made of LabVIEW code. It’s much easier to understand the flow-diagrams than lines of code and even easier to orientate within single VIs due to structures and the possibilities to set comments wherever you want.

Thanks for reading to this point! We had a great time with this project and we really want to thank our supporters: (Probably no advertising allowed here, so we stay without naming them - sorry)

Congratulations for being nominated for the Student Design Award 2013!