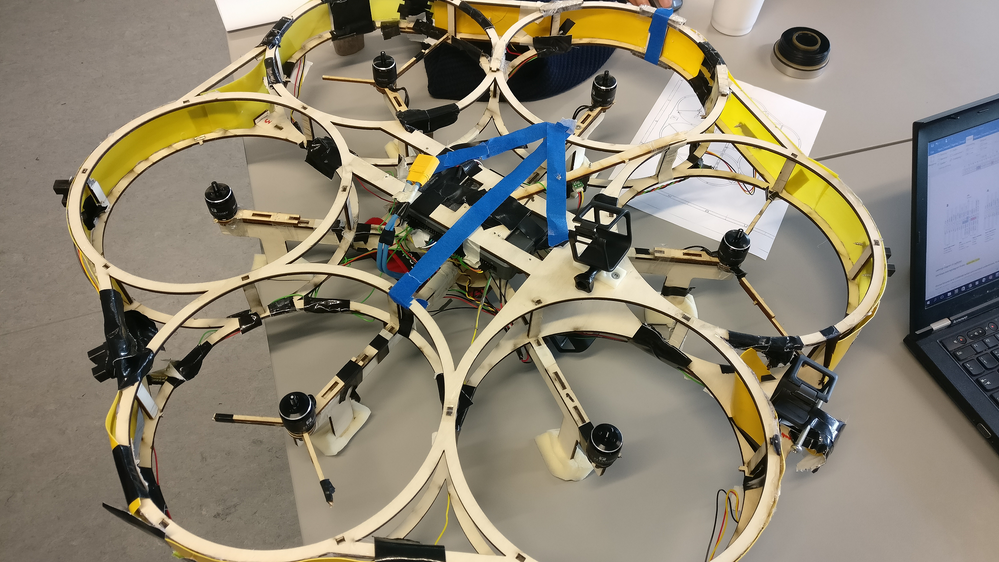 The goal of the project was to create an autonomous drone, capable of 3D mapping a room, using photogrammetry.

In modern engineering 3D modelling is an important part of the design phase, when developing new solutions. 3D models of existing environments are needed when developing solutions to fit in existing spaces, such as new production facilities.

Currently 3D scans of rooms are often made using lidar technology and can be a time consuming manual process. Lidar equipment is expensive and as the process is also time consuming the total cost of a 3D scan can be very high. By automating the 3D scan process time and money can be saved, making 3D models of large rooms more excisable.

We aim to automate 3D scanning of large rooms by making an autonomous drone capable of mapping indoor rooms.

We have made an autonomous drone, that can 3D scan a room using photogrammetry. By moving randomly around the room and avoiding obstacles the drone takes pictures of the entire room with its three GoPro cameras. 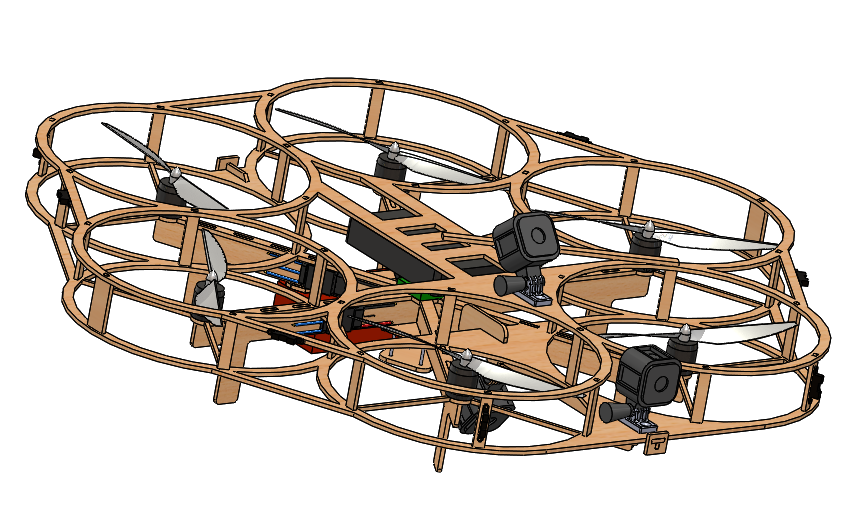 CAD model of the drone.

The drone uses 9 IR distance sensors to avoid obstacles in its path. These sensors are mounted in a strategic way to cover all angles.
One of the sensors point downwards, and this sensor is used to keep a chosen distance to the ground.
The remaining 8 sensors cover the directions of movement, and keep the drone from hitting walls or objects in the room.
In this project a set of Sharp IR distance sensor have been used. They provide an analogue signal, and to achieve optimal results from these sensors a calibration have been done and the signal is continuously processed in the MyRIO. 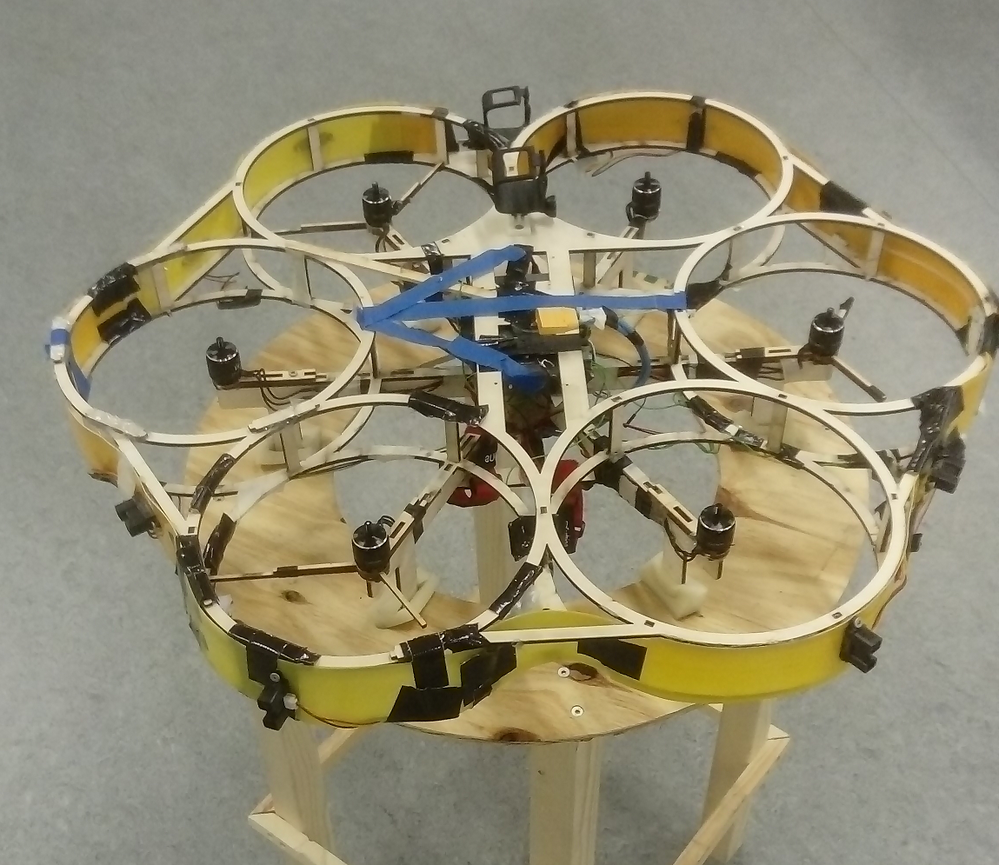 The autonomous drone. Direction of flight marked with blue tape.

The drone is build as a state machine, controlling the movement. When the drone is airborne it mainly changes between an idle state and obstacle avoidance states.
Data acquisition is done in a parallel loop. This makes it possible to run the data acquisition loop very fast, and make signal processing on the data.
A base station is set up, consisting of a laptop running LabVIEW. From the base station the scanning operation is initiated and the drone can also be landed from here. Furthermore, the bases station allows for manual control of the drone for testing. The base station communicates with the MyRIO on the drone using WIFI. 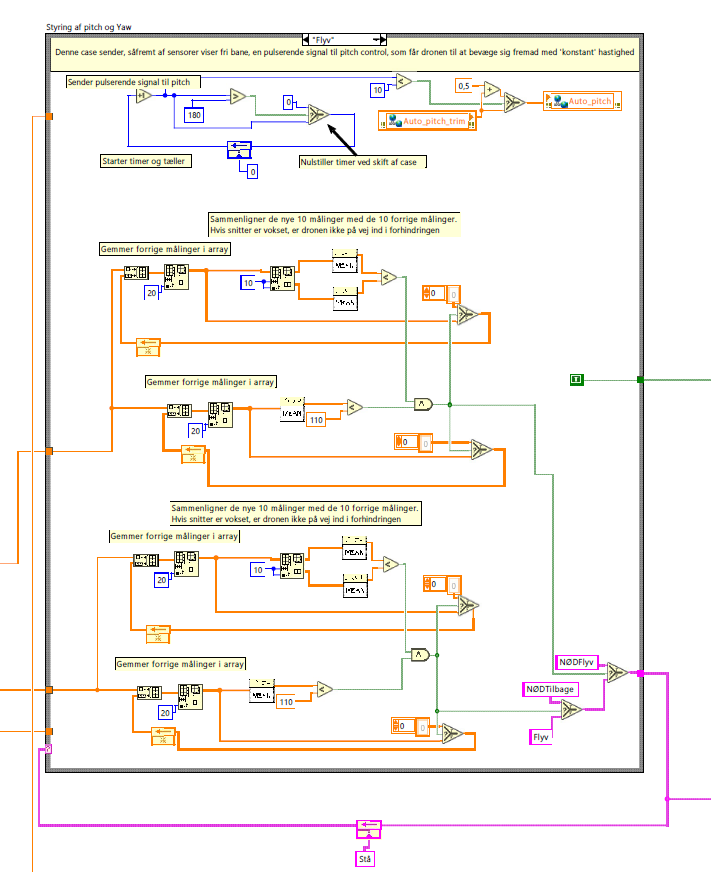 If another revision of the drone was to be build, it should be considered using a different type of sensors for obstacle avoidance. Ultrasound range sensors was found incompatible due to noise interference from the motors, therefore Lidar would be interesting to test.
Experiments with an indoor tracking system have been made, but as this was run on ultrasound, this was also disturbed the motor noise. Implementation of motion tracking using video would be interesting to implement. This would make it possible to implement more advanced path control algorithms.

The project was build in a 10 ECT’s point course in Mechatronics. Approximately 300 hours per student was put into the project during half a year.