Mass Spectrometry and microfluidics are a powerful combination for developing new drugs and vaccines to treat diseases such as cancer. However, since it is an inherently destructive process, the samples are destroyed and can’t be analysed further.

Supported by Wiresmith Technology, Sphere Fluidics have combined their expertise in microfluidics and instrument development with NI’s LabVIEW and FPGA technology to develop a high-throughput mass spectrometry analysis system which can retrieve copies of the interesting samples.

As an NI Alliance partner, we were asked to work with Sphere Fluidics to help them leverage LabVIEW FPGA to drive forward their R&D projects.

Originally spun out from the University of Cambridge, Sphere Fluidics is a life sciences company specialising in developing novel biotech for single cell analysis and characterisation. Its patented technologies help scientists searching for rare and valuable biological variants across research, therapeutic, bioproduction and diagnostic applications. By boosting assay throughput and sensitivity, while reducing costs and saving time, SF aids R&D into new drugs and vaccine generation.

In developing a new workflow for one of its customers, Sphere Fluidics faced the challenge of interfacing its microfluidics platform with a PerkinElmer mass spectrometer (MS) for analysis of the picodroplets. Since MS analysis is an inherently destructive process, SF’s idea was to develop a system which could enable the retrieval of living copies of ‘hits’ that are normally destroyed during MS procedures. It works by firstly encapsulating individual microbes and then incubating them in growth media to enable metabolism and cell division. The picodroplet library is then transferred to an MS splitting biochip, where one replicate droplet is sent for analysis and the other remains stored on the biochip. When a ‘hit’ or clone of interest is identified during MS analysis, the corresponding stored droplet can be retrieved and further investigated. 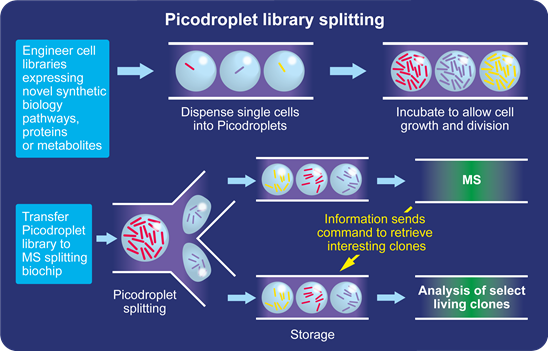 See the picodroplet splitting video to see it in action.

The first obstacle was to find a way to stream data out of the MS to automate the application, rather than rely on its standard display interface, before using it to track and sort the droplets in real time. SF originally planned to use a microprocessor solution to bridge the two parts of the system, automating the measurement, analysis and control of the picodroplets – but the time required to develop such a solution rendered it prohibitive using SF developer resources. Since its microfluidics platform already used National Instruments LabVIEW measurement and control software, SF turned to NI engineers to assess alternative solutions.

Initially, the team attempted to use an NI data acquisition device, but due to loop times being too high, it simply did not have the reaction times to read and sort the stream of picodroplets from the microfluidics platform. FPGA (field-programmable gate arrays) hardware offered the required speed of the microprocessor solution, but with much faster development – as well as greater reconfigurability. And using NI FPGA meant LabVIEW could be used as a common software platform. But lacking the in-house LabVIEW FPGA programming experience, Wiresmith Technology were able to help.

Wiresmith worked with the Sphere Fluidics team to accelerate their product development cycle, providing the FPGA development expertise needed to realise its idea and successfully deliver a fully functional solution on time.

In earlier stages of the project, SF engineers worked directly with the MS manufacturer to develop a C# application to stream data out of the instrument and interface with the SF microfluidics platform over TCP. Wiresmith's LabVIEW expertise allowed it to integrate the MS communications directly, eliminating additional complexity. Taking the algorithm the SF team had developed to screen the picodroplets (before splitting them into two streams for MS analysis or storage and retrieval), Wiresmith were able to implement it on a USB-7856R FPGA card, integrating it with both the microfluidics platform and the MS. Replacing multiple complex software elements with a single integrated LabVIEW workflow and interface resulted in greatly enhanced usability. 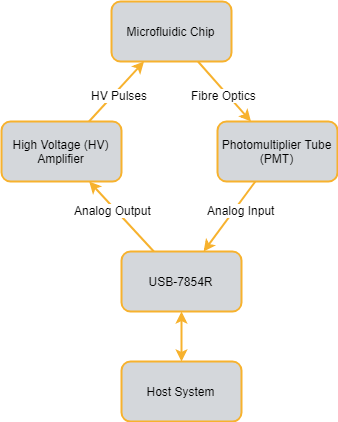 The FPGA boards connected to two photo-multiplier-tubes (PMTs) for droplet detection, and a high voltage amplifier to drive the electrodes for droplet sorting. The FPGA implemented droplet detection, classification, counting and synchronisation detection. Once synchronised, it generated the correct pulses for sorting with microsecond timing precision. The system could also log high-speed data from the FPGA for post analysis. The program’s simple operation enabled the scientists to iterate on designs for other parts of the system (including chip design and droplet chemistry), as well as configure key parameters, such as molecular weights.

See the picodroplet sorting video to see the system in action. The FPGA triggers are sorting on a positive sample. Look for the droplet that goes to the top channel.

Ultimately LabVIEW and LabVIEW FPGA allowed all of the custom components of the system to be developed in a single environment and with Custom Off The Shelf (COTS) FPGA systems. This allowed us to develop the system faster and in shorter iterations meaning the project was kept on time and budget.

This success helps position Sphere Fluidics as a pioneer and leader in mass spectrometer and microfluidics integration – and has resulted in a number of other customer projects in this field. Their solution allows the analysis of samples in less than 10% of the traditional time, combined with the ability to retrieve the samples should accelerate scientists research and development into new treatments for us.