Using LabVIEW software and a CompactRIO embedded controller to develop an FPGA-based solution, which results in fast and deterministic timing control to satisfy the proportional–integral–derivative (PID) controller requirements, log data, and run the safety loops.

The Tun Abdul Razak Research Centre (TARRC), is the UK-based research and promotion centre of the Malaysian Rubber Board. Its research focuses on expanding and enhancing applications of natural rubber. TARRC has pioneered many test and design methodologies for engineering applications of rubber, and many other new applications. It also has a consultancy arm, Rubber Consultants, that offers help with all rubber-related problems.

TARRC bought the Servotest type 178:100:500 servo-hydraulic test machine in 1974 and used it to produce databases well known in the rubber industry, such as the dynamic properties data published in the Engineering Data Sheets (1979-1983). However, TARRC’s engineering unit has barely used it in the last few years, mainly due to the limitations of the controller.

We carried out our first approach to control the machine using software in late 2015, when we needed a machine that could run arbitrary motion histories written into CSV files. The dynamic specifications of the Servotest were a perfect match for the tests, so we explored the possibility of carrying out the tests using the machine.

We had recently purchased two USB-6002 DAQ modules for electronic development from NI. We implemented the USB-powered, compact, and lightweight USB-6002 DAQ module in cascade between the old controller and the PC. We created several LabVIEW virtual instruments using this control scheme and used the machine for consultancy and research after retrofitting the USB-6002 DAQ module.

The digital control system using the USB-6002 DAQ proved to be more than capable of fulfilling our testing needs on the Servotest machine. It also transformed the machine from the least used to the most used among our servo-hydraulic equipment as it enabled more flexibility on user-defined command signals than the more modern machines with digital controllers run by commercial software. However, the system relied on the 35-year-old Servotest controller as the main communication system between the servovalve and transducers. 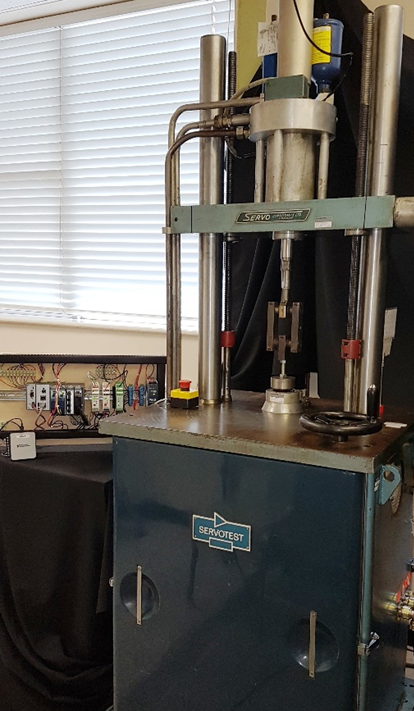 We selected the cRIO-9064 embedded controller to develop the new control system. The software-designed controller features a real-time processer and an FPGA, which we used to: 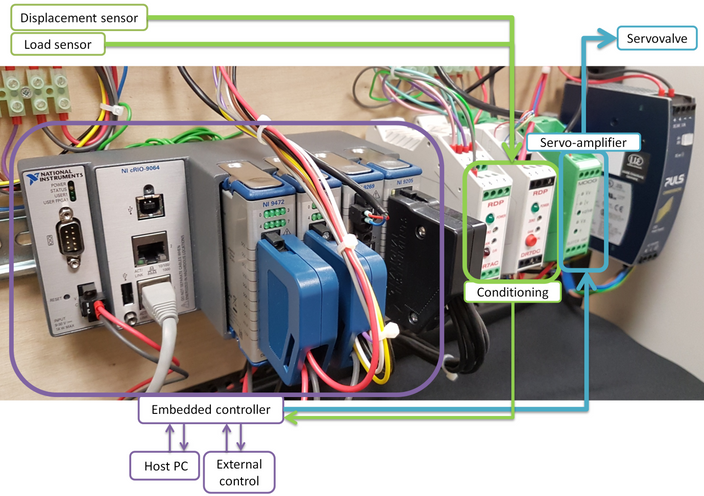 The whole system was programmed using LabVIEW software with the LabVIEW Real-Time Module and the LabVIEW FPGA Module. This section briefly describes the code written for each part of the system. Figure 2 shows a simplified diagram with the tasks carried out by the system.

The control PC has the main user interface (UI). We can use this to activate a legacy support function, which enables the USB-6002 DAQ with the new controller, giving the operator the option of using all the software developed for the previous version of the control system. 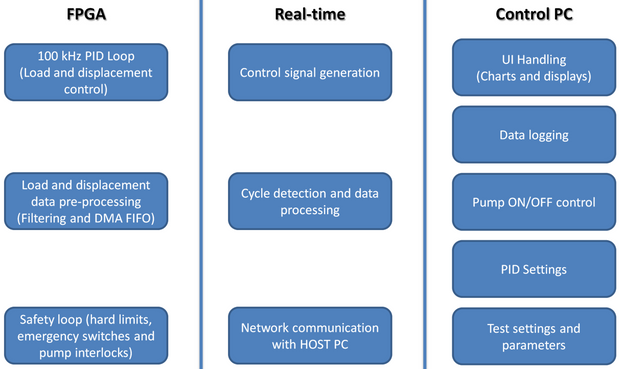 Using LabVIEW with the CompactRIO controller to develop the low-cost modular motion controller was quick, easy, and 80 percent cheaper than purchasing a commercial solution.

Additionally, the interface with the low-cost USB-6002 DAQ provided all the versatility that had elevated our oldest servo-hydraulic machine from last choice to first choice for users, given compatibility with load, stroke, and rate requirements.

Figure 4:Screenshot of the control PC running one of the Legacy LabVIEW programmes with the hydraulic powerpack control on the right

Thanks for sharing. This is very similar to systems I work with and would like to upgrade.