I have several cRio 9041s with identical modules and general setups.  I have one setup exactly how I want (device A) and now I want to duplicate that on all the others.

I had setup the network on both devices prior....

eth1:  static IP each with it's own address

Also I had enabled ssh on both devices

When I deployed the image to device B, I chose the option "Keep the Target's existing network configuration"

After deploying the image onto device B however, I can no longer communicate with it via ssh, and I have very limited information from MAX.  There is a red 'X' on the device name in the Remote Systems list, it only shows one network adapter (eth0) and it has the static information that I had given to eth1 prior to deploying the image.  Even though eth0 now has a static IP, when I plug my ethernet into it, I can't ssh into it and it's not showing up as connected to my Router.

Also the System Settings tab has limited info, and doesn't have the check boxes that would allow me to enable ssh, force safe mode, etc... 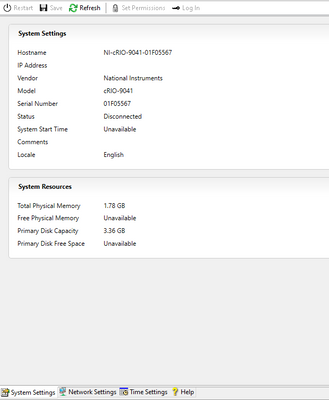 What's going on?  How can I recover the cRio?