Is 64-Bit Real-Time Not Actually Ready?

Is 64-Bit Real-Time Not Actually Ready?

So I was happy to hear that the Real-Time module supports 64-Bit LabVIEW, which is great.  So I got a fresh Windows 10 machine, installed LabVIEW 2021 64-bit with the RT module.  In MAX I formatted my controller, installed the new firmware, and then went to install the software on the module.  But none of the important modules showed up as able to be installed.  In LabVIEW 2021 64-bit I have DAQmx, XNet, and VISA installed.  But none of those are listed in the components that can be installed. 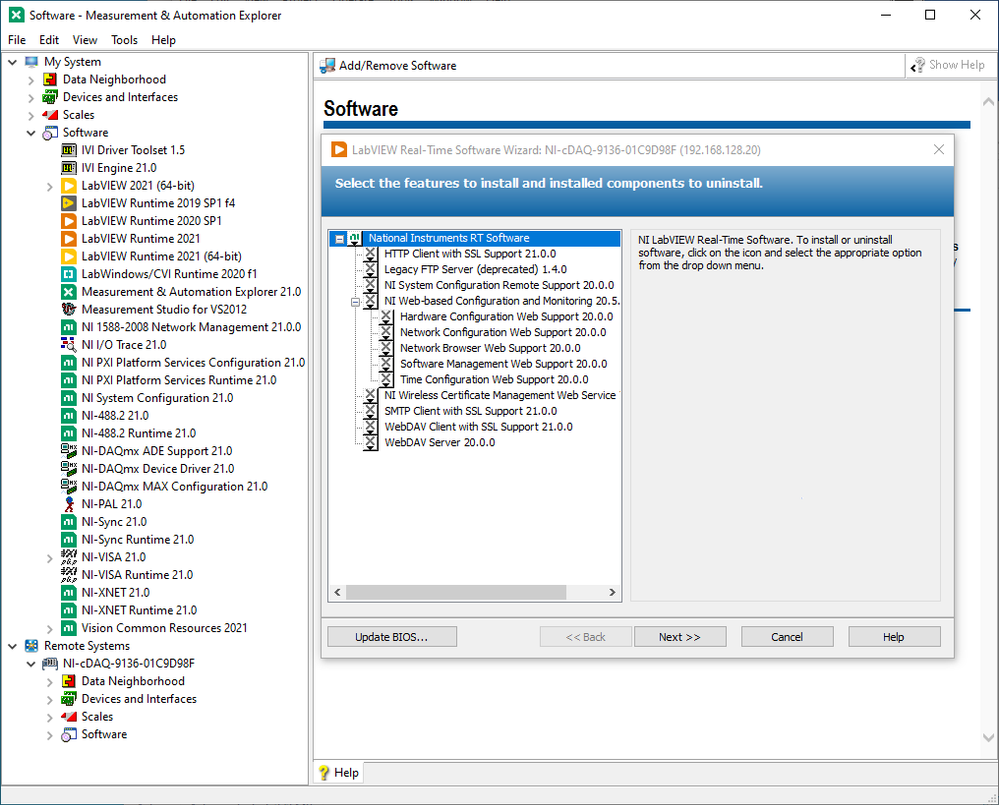 Am I missing something?  Did something not get installed right?  Or are these components not actually supported?  The documentation isn't clear, because if you search for something like XNet support it will tell you it supports real-time, and it supports 64-bit LabVIEW.  Thanks.

Can anyone say anything about the status of 64-bit LabVIEW on Real-time, using these extra components?

There's something called "NI CompactRIO FPGA Target SUpport for Labview 2021 (64-bit)" Which makes it sound like it's supported but I only see PXIs when I try to add a new target to the project.

I see this though:

One thing you  might want to look into is the legacy vs system image. It looks like you're trying to go "legacy" and you should try formatting and then try the system image if it's supported on your target. But, I think there's some surprises there too 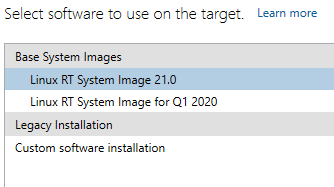 So the FPGA compiler (as far as I know) is only 32-bit because of some external dependencies NI uses.  So I suspect the "NI CompactRIO FPGA Target Support for Labview 2021 (64-bit)" is a toolkit that allows communicating with an FPGA, but not for compiling any changes to it.  So if you had a bitfile already made and it works, this toolkit might allow you to talk to it.

Still my situation is a bit less complicated because there is not FPGA involved.  I have a real time cDAQ chassis that runs Linux RT, and has no FPGA.

As for the legacy software selection.  I've always just selected that, then picked the components I actually use and need.  I suspect NI just made those system images for new users that didn't know what they needed and were frustrated when they'd get an error related to not having some software installed.  I could be wrong but I always thought picking a software pack like that was no different than picking legacy, then selecting the software components it would select.  Access to this machine for debugging is limited so I'm not sure I'll be able to try this out.  We were able to roll things back and get things working with LabVIEW 32-bit for the RT stuff, and LabVIEW 64-bit for the Windows binaries with Network Streams and FTP being used to communicate between the two.  Still I'd rather have one version of the IDE for both targets.

When you say you rolled things back, you're saying you rolled back to LV2020 or something? Yes, I get the feeling that RT support is just for PXI at the moment because that's all that shows up when you try to add a new project.

I'm sure there's a bunch of changes under the hood but for one, I noticed you can't disable SSH in the new system image. I think they dropped the silver light interface because I can't figure out how to get into that UI. I hope they continue to still offer the legacy image but I think what you're seeing in the screenshot is the lack of support for that.