IMPORTANT: This project has transitioned to GitHub. This page is deprecated and will no longer be updated.

Streamlined steps such as Initialize VeriStand and RT Sequence Numeric Limit Test let you create test sequences at a higher level than before.  Spend less time implementing your test sequence and more time validating your design. 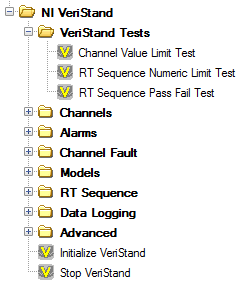 The following diagram represents best practices for  those using VeriStand as part of a Hardware In the Loop (HIL) solution:

TestStand is the main engine for test automation, with VeriStand being a key part in the cosimulation and execution of the test.  DIAdem is used to help analyze logs when necessary.  Then these test results and log files can be linked to design documents using tools such as IBM Rational Quality Manager for increased workflow integration.

See the attached document for a tutorial and example of how to use these steps.

This add-on is provided as open-source code under the BSD 2-clause "Simplified" License.

This add-on is provided as open-source software.  If it does not meet your exact specification, you are encouraged to modify the source code to meet your needs.

If you encounter a problem with this add-on: please post to the community forum for this add-on:

If you have a suggestion for improving this add-on: please open an #Enhancement issue on this project's Github page:

You must use this feedback forum for support. Do not call National Instruments for support for this add-on. National Instruments does not support this code or guarantee its quality in any way. THIS EXAMPLE PROGRAM IS PROVIDED "AS IS" WITHOUT WARRANTY OF ANY KIND AND SUBJECT TO CERTAIN RESTRICTIONS AS MORE SPECIFICALLY SET FORTH IN NI.COM'S TERMS OF USE (http://ni.com/legal/termsofuse/unitedstates/us/).

This package uses the following version convention based on Semantic Versioning 2.0.0.

This version will match the version on this page and in the installer filename and in the Windows Control Panel.

TestStand provides four version fields for Step Types. The version of the VeriStand Step Types will be displayed within TestStand as:

Hi I'm having a puzzling and disturbing issue with the Set Parameter Value custom step type.

I'm running a test sequence where I need to dynamically set a model parameter to a specific value.  The step type works flawlessly on my company laptop computer.  The same step called on my lab computer (where I need it to work the most) fails every time with the error:

Any assistance would be greatly appreciated because I'm at a loss for what to do next. Images are below.

For future issues, the feedback forum can be found here:

Rebuild TS 2014 VS 2014 to use packed project libraries for internal LabVIEW code instead of LLBs.  This helps certain errors with large applications since it provides a separate namespace for the code.  Since it is a relatively labor-inensive process to rebuild this for each version, I won't do them all now.  We can rebuild any other versions as necessary - just post to the feedback forum:

Could you tell me if is there this addon for TestStand 2014 SP1 64bits?

Thank you very much,

For the time being, there is no 64 bit version.  32 bits has been enough for even very large deployments and applications  If you can tell me more about your application, I can see what I can do if it does need 64-bit.

sorry for the delay, we are using Labview 2015, TestStand 2014 SP1, VeriStand2015 integrated in PXI1078 for automotive applications. We are simulating a very complex system butTestStand is giving "Out of Memory" very frecuently. What can we do for working with 64bits?

Even if we tried to use the 64-bit version of TestStand, it cannot call 32-bit code.  32-bit code can run in 64-bit operating systems (from emulation layers) and it runs seamlessly and well most of the time.  The trouble comes when 64-bit code tries to call 32-bit code (or vice versa), as it is not possible to do directly.  VeriStand today is built on 32-bit DLLs.  In the future it may support 64-bit, but for now it does not.

As far as your application, there are many ways to optimize the amount of memory that is used.  I have seen very large applications run in 32-bit.  Here is a start at some resources on TestStand and memory use:

In the future, the best place to post questions is on the feedback forum:

you can add a variable in Local.

then you can add Local.LogFilePath when config the Start VS Logging step.

i'm using the package, it's great.

But i have a problem during a project. When i call Start VS Logging more than once, there is error occured:

is there any solution available?

Are you trying to call the Start Logging step multiple times to run multiple logs concurrently?  Multiple logs are not yet supported, and that would be the cause of the error in that case.

This is what I suspect is happening:  Both Start Logging steps are running. The second one is actually giving you a warning in your report that you haven't seen.  It gives a warning and restarts the log, since only 1 runs at a time.  The first Stop logging step stops that log.  Then when run again, the Stop Logging fails and returns an error because it has already closed the open logging handle.

We are aware of the need to add support for multiple logs in these steps.  If you need it, you can call the VeriStand API since the API allows multiple logs.

I am getting the following error when using this in TestStand 2014:

What does this mean?

It seems to be complaining about a null reference, so did you make sure you're calling an "Initialize VeriStand" step before calling the RT sequence step? Also, please post all further questions on the support & feedback forum.

In TestStand I am running both direct Veristand steps using this add-on and a LabView applications that calls the same Veristand project.  The LabView application is run as it's own thread.  I activate the front panel of the VI, and the connection values from TestStand do not show up on the front panel.    At the end of the sequence I get this error from the LabView adapter : "NI VeriStand:  Cannot perform this request because NI VeriStand is not running a system definition file. Deploy a system definition file, and then try again.".  The Veristand steps work.  Is there a special secret sauce I need to execute both Veristand and LabView components from TestStannd?

I have replied to your question on the support & feedback forum for these step types. 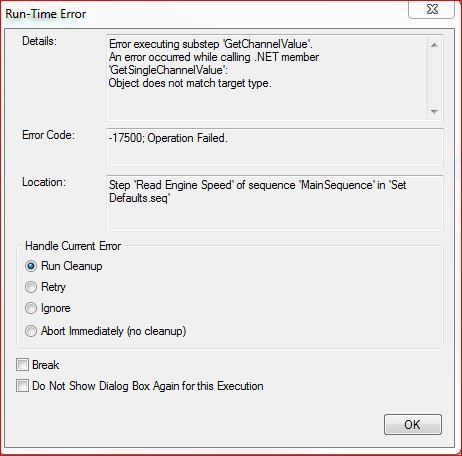 I am getting the following error when using this in TestStand 2014 SP1:

What does this mean?

Does anyone know what the "Open References" step is used for?

Just noticed that the links to latest version of TestStand 2016 (64-bit) steps are wrong for all Veristand variants, basically they are pointed to Release 6 folder when it should be Release 7 here are ones affected I have discovered are affected.

Currently it is (link doesn't work):

Would be great if it can be updated.

Background:
I'm working on Project which is using RT Pharlap and Veristand.

3) How to pass data of model channels, variables, parameters from Real Time Sequence(Test Case) to teststand, so i can log that data in Teststand test report

This project has transitioned fully to GitHub. This comment section is no longer actively monitored. Please submit future questions and issues to the GitHub Issues page for the project: