First I have followed the example in: Dynamic LabVIEW Subpanel in a TestStand User Interface

I have followed the example from above to create a subpanel in my user interface.

I pre load all the available "tests" sequence files when the Full UI is launched.

Then the user picks from the ListBox and runs via "Test UUTs" or "Single Pass".

The appropriate Front Panels Populate in the SubPanel, but are not active.  At the same time a new window opens with the same VI.  This window is the active version of the Front Panel in question.

I have reviewed the Caveats described in the example:

1. The VI is not open in LabVIEW before executing.

I've tried multiple settings for the individual steps in the sequence file with no difference.

Why does the second window open with the active VI?

I loaded the application and it worked fine.

Have you tried to use the Example.seq in the program?  Also, are you sure that the VI is not called asynchronously?

I have tried using the Example.seq with the same effect, there is a vi in the subpanel, which is not active and a separate window pops up which has the same vi which is active.

I am not 100% sure about running asynchronously.  I have not purposefully set the VI to be asynchronous.  Is that a setting?  Where is it?  Or do you have to use the step for Running Asynchronously?

When I used the example with the Asynchronously Step, a new window appears.

In the other hand, please make sure that "Show VI Front Panel is On" from the LabVIEW Action Step is turned on:

I appreciate you sticking with me on this, thank you.

I am not using the Asynchronous step.  I have "Show Front Panel" selected.

Some things I found in my continued experimentation is:

1. When using the Simple UI, and putting the activeX components inside the Event Callbacks subVI I get the same response as I see in the Full UI.

2. I tried moving the ActiveX components to different locations in the Full UI and had no success.

3. This makes me think there may be a setting in the Full UI somewhere that is stopping us.

I've attached a few pictures of what I did in the Simple UI. 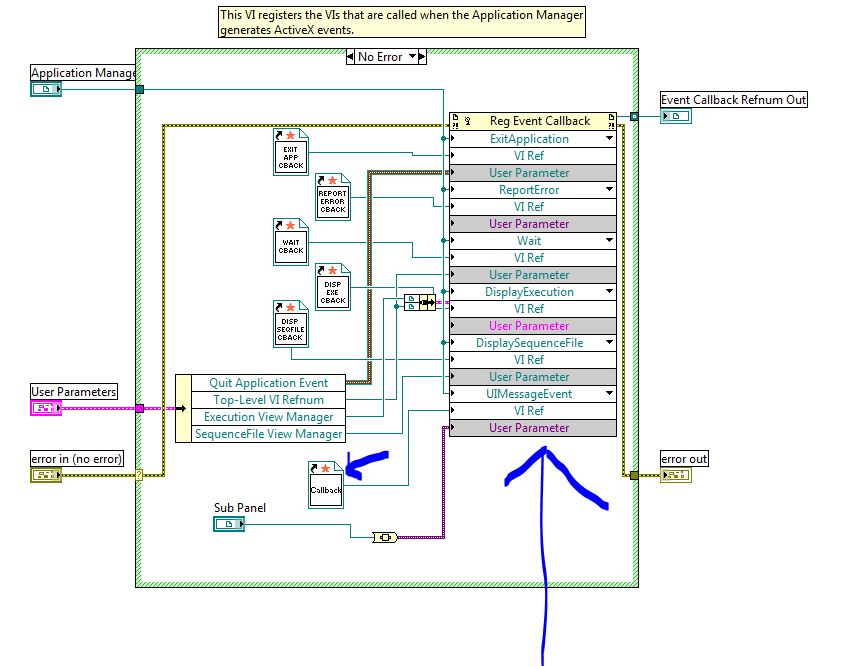 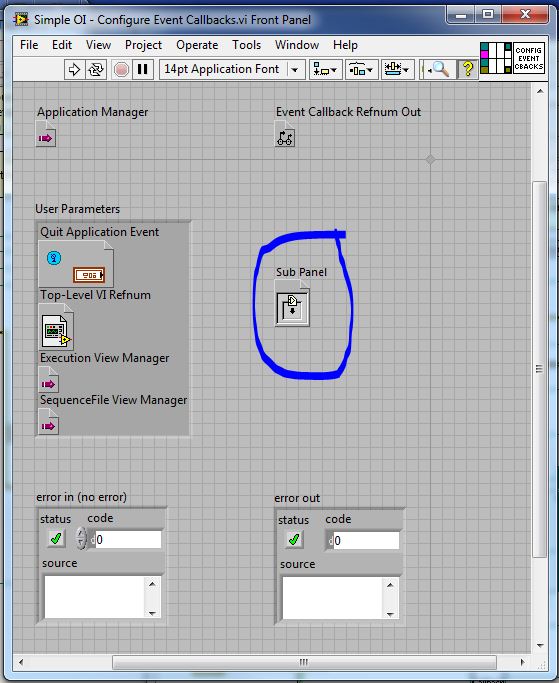 I was able to get the example working by moving the event into the Config Event Callbacks SubVI.  I've attached the project where it works for me.  Let me know if this works on your end.  I'm not sure what is difference between our programs just looking at the block diagram.  Note that my subpanel line is coming from the subpanel reference on the block diagram.  I am not sure if yours is coming from the same reference.

I'd love to see the details, but unfortunately I can't.  Your versions of LabVIEW and TestStand seem to be newer than mine.

I believe this is saved correctly for 2012.  If it isn't, let me know and I'll get a machine with only LabVIEW 2012 on it to confirm it's backsaved.

Ok, I can get the simple OI to work now also.

I can't get it to work in the Full UI. Do you think there could be any issue with the subpanel being on a tab of the Full UI?

Sorry for the delayed response.  I got it to work in the full UI.  I'm guessing there might be something with references that is messing up.  When I recreated this in the full UI, I made sure to copy and paste all controls and functions as opposed to remaking them to ensure I didn't mess up the references.  I've attached my code that shows it working on the VI tab. I didn't attach the sequence files or the VIs the sequence file calls.  You should still have them from earlier. Let me know if this works for you.