To begin creating a custom I/O personality, first run the NI VeriStand Custom FPGA Project Wizard. The Project Wizard is accessible from LabVIEW 2012+'s create project dialog under templates (Figure 1). In LabVIEW 2011 and earlier find it in, LabVIEW’s Getting Started window (Figure 2) under Targets. You can always find it by selecting File>>New… and choosing NI VeriStand Custom FPGA Project (Figure 3).

Figure 2. Getting Started Window in LabVIEW 2011 and earlier

The NI VeriStand Custom FPGA Project Wizard guides one through the process of selecting the FPGA and any C-Series modules that may be contained within a cRIO or C-Series Exapansion Chassis. It operates similar to the wizard for starting a new LabVIEW FPGA Project except that it adds the necessary components to the project for a custom FPGA to be used with NI VeriStand. The project wizard adds a framework template, DMA FIFOs, and corresponding XML file to begin development. It also saves the project and files to a location specified by the user. A typical project created from the NI VeriStand Custom FPGA Project Wizard is shown in Figure 4.

Adding basic I/O to the communication loop and IP based I/O in asynchronous loops is made easier with the NI VeriStand RIO Library contained in the installation attached to this document.

Basic I/O consists of any C-Series module whose I/O can be placed directly in the communication loop. Customizing the FPGA VI with basic I/O only requires dropping the corresponding subVI in the communication loop, creating a constant that defines the I/O being used by the subVI, and connecting the packet input or output of the subVI to the corresponding packet receive or packet send For loop.

Special Case I/O consists of C-Series modules that either use a Delta-Sigma ADC and are independently timed (such as the 9233) or consist of high resolution ADCs that execute too slow to place in the communication loop (such as the 9211). The special case I/O subVIs are meant to be placed on the block diagram as asynchronous loops. When placing the special case I/O subVI on the block diagram, its contents will be placed instead of a subVI. The contents will consist of the asynchronous loop and packet indicator. Finish by creating a local variable for the packet and placing it into the communication loop to connect to the DMA FIFO.

Some loops require additional processing instead of simple I/O connectivity. One example is PWM and frequency measurements. The NI VeriStand RIO Library also contains IP (Intellectual Property) Based I/O that will allow the user to quickly take advantage of the power of the FPGA with an asynchronous loop already programmed to perform a specific function. The IP Based I/O will be implemented as asynchronous loops in the same manner that Special Case I/O is implemented.

The final step to creating a custom FPGA personality for NI VeriStand is defining in XML the data sent to and from the FPGA in the 64-bit packets. Please refer to the NI VeriStand Help for the topic on Creating a Custom FPGA Configuration File.

The NI VeriStand RIO Library includes an XML snippet in each subVI that defines the data in the packets received/generated by the subVI. This snippet can be copied and pasted into the corresponding section of the *.fpgaconfig file that defines the interface from FPGA to NI VeriStand host.

The framework provided by this add-on has built in synchronization support to accomplish this. It uses a 9401 or 9402 module to share a distributed clock between the RIO targets. This is disabled by default and must be enabled by the user. To enable this functionality:

This software is not yet officially supported by National Instruments. If you encounter a problem with these tools, or if you have suggestions for a future revision, please post to the forum for this tool: NI VeriStand FPGA-Based I/O Interface Tools Discussion. You must use this feedback forum for support. Do not call National Instruments for support for this add-on.

National Instruments does not support this code or guarantee its quality in any way. THIS SOFTWARE IS PROVIDED "AS IS" WITHOUT WARRANTY OF ANY KIND AND SUBJECT TO CERTAIN RESTRICTIONS AS MORE SPECIFICALLY SET FORTH IN NI.COM'S TERMS OF USE (http://ni.com/legal/termsofuse/unitedstates/us/).

Fails to install in 2013, and I don't see an explanation of how to manually install the files.

I have it installed on 2013 so something must be going wrong on your machine. Are you running LabVIEW as administrator when you run the installer VI? This is required.

Also, I've noticed some people have trouble with long path names. You might want to unzip the contents (be sure to unzip before running the installer) to a short path like C:\temp

I was running as admin.  The file path length was the issue.  I was getting a 'generic file I/O error' prior.  Now the install completed once I shortened the path.

But after I restarted LabView and I run the 'NI VeriStand FPGA Project" template I get the following error:

- LabVIEW FPGA is not installed.

- The LabVIEW FPGA installation is corrupt.

I definitely have the FPGA madule installed and it is not corrupt as I have been using it daily with no other issues. Any help is appreciated.

Well... at least we are making some progress.

What happens if you try to start the LabVIEW FPGA Project template? (The NIVS template hooks into this one)

I uninstalled and re-installed it.  Now it works.

Another question... Can I use this with a 9144 EtherCAT master?

No, EtherCAT does not use DMA and uses a totally different interface. See the scan engine custom device page to learn how to use that with NI VeriStand: NI VeriStand Add-On - Scan Engine and EtherCAT

How do I find these?

Hi wegunterjr
Whwen you are installing versinatd you need to install support for LabVIEW. As well as you need LabVIEW FPGA module installed.

The code works well and helped me a lot. Thank you!

2) If a Z-pulse (0 degree sensor) is connected, then the position is reset to 0 whenever Z-pulse is high. This is expected behavior. But the Velocity becomes a large -ve number once per revolution due to the reset of position to 0. To handle Z pulse correctly, the Velocity Calculation should be ignored when Z-pulse is high.

Hello, if I create a Custom VeriStand FPGA Project there es no syncronization/timing like in the template C:\Users\Public\Documents\National Instruments\NI VeriStand 2016\FPGA, see pictures: 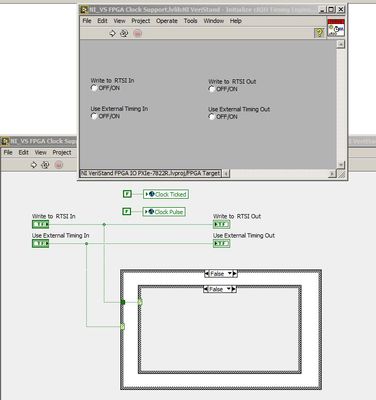 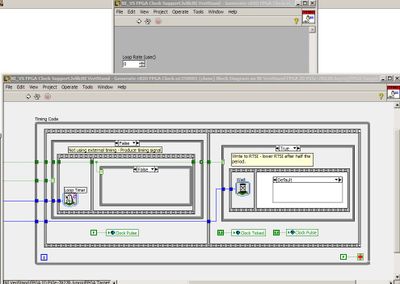 I  am Efeel from china.Are you still update the toolkit?

I want to develop a HIL system with PXIe-7868R,but the Toolkit seems not support the device ,I hope you can give me some helping .

The tool does not have to support a specific FPGA. You can use a different configuration and modify it specifically for your device.

Here is an example on how to do it for the myRIO:

FPGA Configuration file to use myRIO with VeriStand .