Should We Even Be Talking about 6G?

Friends and coworkers have been sending me a lot of articles lately about 6G, with snappy headlines that seem to suggest that 5G is already a thing of the past. As a marketing manager working on cellular technology, they want to know On the one hand, I’m excited to see that the hype surrounding 5G is shining a spotlight on wireless communications research and that visionaries are looking ahead at what’s next. On the other, their questions make me a little nervous because there’s so much left to do in 5G.

Figure 1 below depicts a rough timeline for 5G over the next few years. The 3GPP standardization body completed Release 15—the first 3GPP release for 5G—back in 2018, and we’re just now beginning to see these types of commercial products hit the market. These initial rollouts largely focus on enhancing the mobile broadband experience, with some early adopters rolling out mmWave solutions for fixed access. As early 5G systems are being deployed, Release 16 is underway, and its work items are supposed to evolve and expand the 5G ecosystem.

3GPP began Release 16 with the lofty goal of bringing industrial IoT, private networks, and V2X applications to the market. Now that work on this release has progressed, it’s becoming clear that it’s packed with too many work items and study items and that many items will need to be pushed out to meet the Q4 2020 deadline. This means deferring study items to Release 17 and beyond. 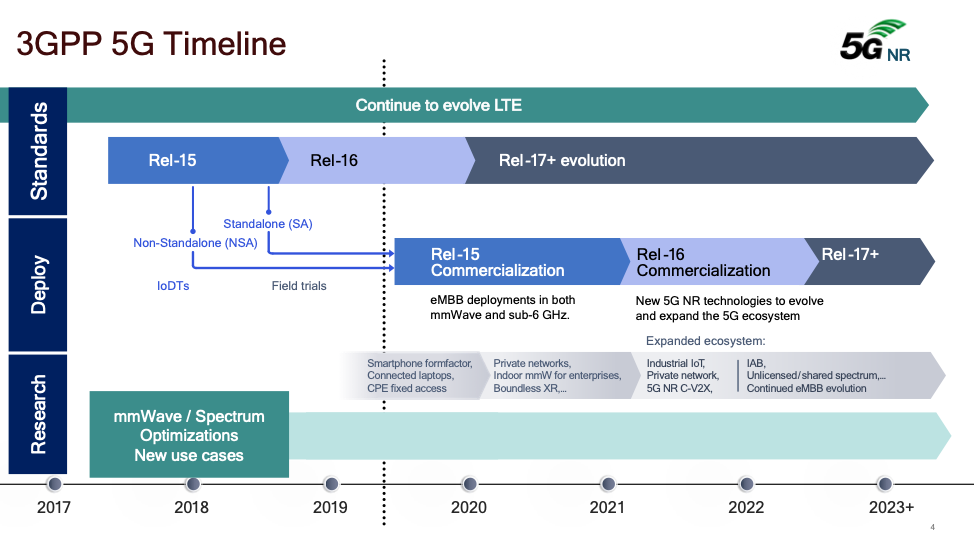 For 5G to be a success, applications beyond enhanced mobile broadband must be addressed.  The true value of 5G has less to do with upgrading cell phones so people can download movies faster and more to do with connecting new kinds of devices and fundamentally changing the way machines and humans interact with each other.

Release 15 laid the foundation for 5G. Release 16 addresses enhancements and improvements to the work completed in the previous release while attempting to enable applications such as integrated access and backhaul—a critical technology for deploying mmWave—and using 5G NR in unlicensed bands.

The work and study items for Release 17 will be finalized in December 2019; it’s currently scheduled to be an 18-month release. Work on Release 18 is expected to begin in the second half of 2021. Topics include items that weren’t addressed in Release 16, including:

After the algorithms are finalized in the standards, commercial products are developed and rolled out to the market which takes time. It’s likely that the technology featured in Release 16 won’t be available commercially until 2021 or later, and the technology in Release 17 won’t be in the marketplace for another 12 to 18 months after that. And by no means can we expect 5G to be complete after Release 17. Like LTE, 5G will continue to evolve and improve for years to come.

5G is a rich that encompasses far more use cases than 4G/LTE or any other standard that has come before it. The world is hungry for new wireless technology and the promise of improved productivity. It’s easy to get distracted by the potential of 5G without realizing the massive size of its scope and just how much work remains.

When 6G Really Is 6G

There are some research topics that fall outside the scope of 5G and should be considered 6G. Terahertz is a good example. The 5G standard is currently looking at using spectrum below 52.5 GHz, and spectrum 114 GHz is slated for Release 18–21 or later. Spectrum above 114 GHz doesn’t have a release assigned to it yet for the standardization to begin.

Based on this roadmap, the idea of using frequencies of 140 GHz and above for cellular communications is out of scope for 5G. Terahertz frequencies have unique properties which enable new and intriguing applications, like adding sensing to wireless networks. Research on this topic is in the early phases; the hardware that is needed to bring THz into commercial products is still years away. Researchers, especially those at top institutions and academic labs, should be investigating exciting new technologies like THz. But my hope is that the desire to create marketing buzz around the next new thing doesn’t distract us from completing the work required to make 5G a success.