Used it years ago.  Made a simple resistor network and measured voltages across the resistors.

If the power source is a battery 12v, and there are 3 resistors, 2k, 2k, 1k and I measure across the middle 2k resistor, what should the voltage be?

So a battery source, and 3 resistors in series.  am I doing something wrong?  why does it show 12v?  across the middle resistor?

The initial schematic was drawn where the battery negative went to the GND symbol, the battery pos went to the first  of 3 series resistors, the last resistor went to another GND symbol.  this produced wrong results.

Then I removed the GND references and connected the wires with just a battery and 3 resistors.  here it gave the right voltage across the 2nd resistor

Added the GND references.  it has the same reading.  Most of my work for the past 20 years has been writing and testing software and applications;  I double and triple checked the setup, it failed as noted. 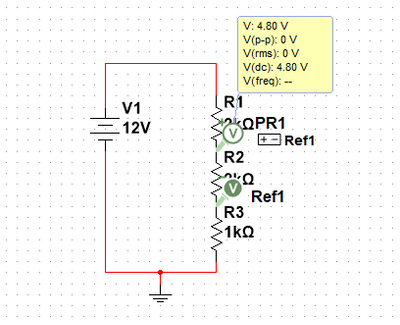 Can you provide more details about what kind of measurement are you performing?

In order to obtain the voltage across the R2 (middle) resistor, a differential voltage probe can be used.

As computed in the link you have sent, the voltage value across R2 resistor is correct.

ok the 4th time trying to reply here...  ni is not what it used to be.

your sch has 3 resistors in series with 1 battery and 1 gnd reference.

i started with the battery, neg post to gnd.

3 resistors, one tied to batt POS, the other end of the 3 to another gnd.

later without changing the wiring that same line measured 5.0v on the meter

In a few minutes of connecting things, the measured voltages were wrong, and they changed.

not as much detail because having to type it all out again isnt fun.  will click and probably say cant find text, mismatch try again later. 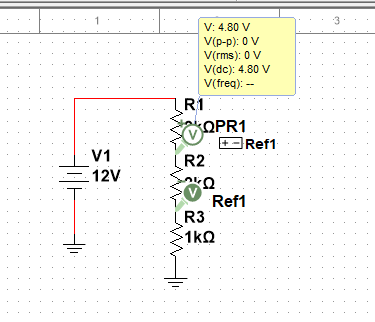 We cannot reproduce the behavior described with two ground connections.

What instruments did you use to measure the voltage?

What type of simulation have you chosen?

Can you provide a screenshot of the schematic?