Do you have an idea for how to improve Multisim and Ultiboard? Submit and vote on ideas now!

Labels
Idea Statuses
Turn on suggestions
Auto-suggest helps you quickly narrow down your search results by suggesting possible matches as you type.
Showing results for
Search instead for
Did you mean:
Options
1 Kudo

Set up ultiboard with all the test instruments and spice models  like multisim. You would do away with multisim and develope a single interface within ultiboard to simulate and design and layout ....


You would place the parts on the board, i.e. transformer ,diode caps wire them  like you do in multisim, place test instrument ...


This would save time because you would place parts where the are to be , have the ability to run simulation within ultiboard  single interface ..


Place a 741 op amp from the ultiboard library that would have the foot print and spice model with in ultiboard , place the feed back resistor ..

It kinda make no sense to lay out twice , once in multisim , then ultiboard , the single interface would be king.. 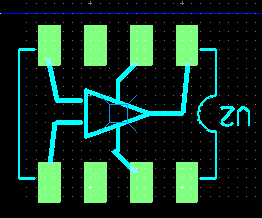 Like this idea.  The schematic would be generated from the layout of the circuit.

would really great if circuits could be layed out independly, tested, and then joined together.  Joining would be reflected in the schematic which also would be a infinite sheet where initial parent circuits would be defined by a boundary like a named rectangle, which could be stored as a circuit with pins at border and used for other designs, including the layout!

As Einstein put it, “The significant problems we face cannot be solved at the same level of thinking we were at when we created them.”

I need the Ni research and development team to start on this right away , this would be a major change for PCB lay out and a time saver when your PCB layout is your schematic and PCB and all test and spice model in a single program ..

Every time you place a part from Multisim parts library to the sheet, you could be doing the same thing in Ultiboard single interface wish would save allot of time ..

For example, you build a power supply in Multisim with all the diodes, capacitor  transformer  and all the components for the power supply , when you export the net list to Ultiboard , you now have to find each part , put them in the power supply area on the PCB wish is the waste of time.

With the new Ultiboard's single interfase for layout and simulation with ultiboard's new parts spice model library and all the test instuments from Multisim , cuts out the time it takes to draw the schematic first...

Just imagine you are in Multisim , and instead of looking @ schematic  symbols and wires  , you are looking @ PCB traces and foot prints and test instruments in stead.

If you like the idea, then vote for it!

That might be a nice option for some people but I would not want to see the schematic capture portion removed/replaced. I need the ability to make a nice looking schematic. If anything, add vector graphic output like svg or eps.

I agree worth les22.  Organizing in this fasion will result is horrendously ugly schematics for all but the simplest designs.

Sounds like an entire re-write of the apps as well.  A huge effort that would be better spent converting to 64bit and enhancing performacne so that MS/UB become practicel for large designs which now require going to other vendors tools instead.

Chip U18 model always errors. Chip model U18 is duplicate of Chip model U17. there should be no error when i select simulate. you would need to see my schematic to solve this problem. if you could make me 4 copies of page one and 4 copies of page two on 8 1/2 by 11 sheets of paper. you would need to reduce the d size drawing by 32% to fit the whole page on a 8 1/2 by 11 sheet of paper.