As we all know, Microsoft announces the new version of .NET which is the .NET6.

Now currently if you wish to work with C#, you have to opt to at maximum .net 4.8 framework.

Is there any plans to support these new versions of .NET? As i wish to upgrade my systems and start working with the latest version of .NET.

I think Yes, but I am not sure for this.

You may send an email to NI to obtain the right information for this, you will follow the news to know the upcoming releases.

The application can be compiled and run. It works as long as no NI UI controls are called. Those result the following error: 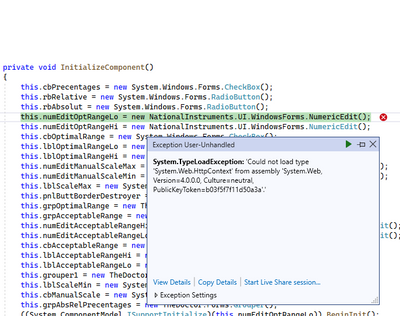 Maybe there is some hope, that NI will bring Measurement Studio into .NET6 because I succeeded to port a non-NI based old .NET4.8 windows forms application into .NET6.

I did not test DAQmx..

I second that. It was quite ok to ignore .NET5 because this was a work in progress version with many problems and missing features.

But .NET6 is a LTS version that is here to stay and Microsoft, despite telling that Framework 4.8 will be supported for a long time, is doing everything to pull developers to .NET6. I mean they even adapted Windows Forms, modernized it by a lot and try to convince developers to convert their older projects.

This tells me that Microsoft wants to get rid of .NET Framework as early as possible. NI has to move to support developers in this transition and not to thwart them.