thanks...  I really apperciate it.

Hope this will help

I need my difficulties because they are necessary to enjoy my success.
--Ranjeet

Pix 2 is the correct one except that you write False in both sequences (so you're never actually switching the output...).

You could also simplify as follows (every 1000ms invert the boolean): 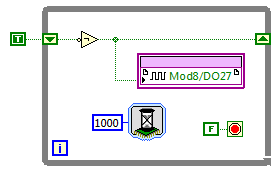 Now just to complete the discussion , this piece from LabVIEW help ( to which people do not give much attention )

" Avoid using the Wait VI or Wait Until Next Multiple VI in parallel with other LabVIEW code, which can lead to unexpected timing behavior. Within a timed structure or a VI set to time-critical priority, only one thread is available, so the timing VI executes in sequence with the rest of the LabVIEW code despite being placed in parallel. In this case, LabVIEW serializes the parallel code paths while compiling the VI, and the execution order of the timing VI is subject to change from one compile to the next. On the other hand, when the code is not inside a timed structure or a time-critical VI, LabVIEW executes the timing VIs in parallel with the other LabVIEW code, which changes the effect of the timing VI."

Thanks for the vi. It seem like both the Leds are coming on at the same time.  Is the correct?

I have a state machine which i use the wait as method to avoid cpu using ton of CPU power when it waiting for signal.

I was under the assumption in pix1 that the wait function would wait a total of 2000ms. The combine wait time. I did not know it would run in parallel.  I think that clears up why I was seeing what I am seeing. Thanks.

Do you have any suggestion for my state machine wait? It is only 5ms.

I doubt both is happening at same time

I need my difficulties because they are necessary to enjoy my success.
--Ranjeet

Having some sort of execution timing (i.e. your 5ms wait in your state machine) is important to avoid hogging your CPU resources.

I don't have time to provide an example but essentially you have a 'Toggle LED' state which checks a timer (e.g. using a shift register or the 'elapsed time' express VI) and if it has expired (time now - time LED last toggled > 1s) then toggle the LED. That way your state machine will continue to run at a higher rate and can respond to other actions (e.g. exit/stop) without having to wait too long.


I have a state machine which i use the wait as method to avoid cpu using ton of CPU power when it waiting for signal.

Wait a minute.  The code you showed earlier was in FPGA.  Is this question still in the FPGA realm?  If not, then you don't have to worry about CPU power.  FPGA is compiled in hardware.  There is no CPU.  That is part of the point of going with FPGA.

There are only two ways to tell somebody thanks: Kudos and Marked Solutions
Unofficial Forum Rules and Guidelines
"Not that we are sufficient in ourselves to claim anything as coming from us, but our sufficiency is from God" - 2 Corinthians 3:5
0 Kudos
Message 8 of 10
(1,394 Views)
Reply

The code run on the real time system.. VxWork.

Technically no, but it changes too fast for you to notice. Both waits wait in parallell, so it'll loop directly after setting the variable to False turning it into True again.