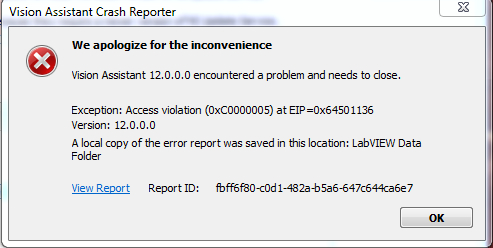 I encountered a problem with openning vision assistant 2012. It shows the crash report like this, i captured and uploaded.

I tried fixing it, modified it but it remains a same problem. I even tried vision assistant 2011 but still my pc report the error like this.

Every time the software stops working when initilizing, i mean it even does not shows the normal interface panel. interestingly every time it stops at initilizing QR code reader plug-in.

I used the same installation package on other pcs. It works fine for other pcs. But when I install it on the pc i will use to work, it crashes like that.

I guess there must be something wrong with some setting about plug-in on this pc. Does anyone have similar experience and may share his way to solve the problem.

This is the "signature" of "something went very wrong inside NI's Run Time System for Some Reason".  Sometimes it's a bug somewhere in LabVIEW (I'm looking at you, LabVIEW 2011 Network Streams!), but sometimes it is just an unfortunate set of hard-to-reproduce-and-understand circumstances.

You mentioned that this code works on some machines, but doesn't work (reproducibly, i.e. it always fails).  This suggests, to me, that this is an interaction between LabVIEW and something on the machine where it is failing.  Did you do anything on this "suspect" PC before discovering this problem?  Did it ever work on this PC and then start failing?  [If so, what did you do before you saw failure?].  Do you have anything noticably different on the suspect PC relative to the others?  Is the OS the same?  Same versions of Standard Software (Office, Antivirus, Visual Studio or other Development software)?

If it is "random Bad Luck", you can sometimes cure it by "Positive Voodoo".  This involves (a) uninstalling all NI Software (Control Panel, Programs and Features, NI Software, Remove All), (b) rebooting (very important!), cleaning up your system if necessary (remove stuff you don't need), (c) rebooting, (d) installing a single version of LabVIEW components (in your case, LabVIEW 2012), (e) reboot, (f) cross fingers and (g) try your program again.

Have you called NI Support and reported this crash to them?  Did you get a request to send a Crash Report to NI when the Crash occurred?  Finding the cause of such a Crash is tricky, but if NI can reproduce it, they can begin to analyze (and fix) it.

Thank you so much for your reply!

Actually all the PCs were maintained by our technician, they installed same OS, and almost all other same softwares like antivirus, office...

This crash happens only on that PC. and it repeatedly happens. I tried uninstalling and installing again but still it crashes like that.

If the machines are substantially the same and one is seriously misbehaving, instead of re-installing LabVIEW again, do a complete re-format of the hard drive and completely re-install the Operating System and other software, including LabVIEW.  You may have a problematic component (or even a virus) lurking somewhere ...