I was working on a SISO (Single-Input Single-Output) system. I ran the simulation version first and everything runs fine. Then i tried to implement it on USRP 2920.

I found many examples of how to configure it but i wanted a detailed explanation of the working. 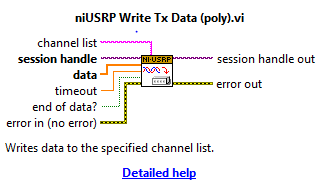 I am accessing this in a particular transmit state. I give it a data of one frame equivalent to 3000 Symbols and 30000 Samples (Upsampling factor=10). In total, i have to send 10 frames. So as soon as i write TX data of one frame would that be placed inside the USRP buffer and transmission would start for that with the sample or I/Q rate defined? What does timeout really mean in this context, is it defining the time/ultimatum given to USRP to transmit one frame of data? Also how can i cause a continuous stream of transmission. Since i think logically buffer 'may' become empty and we are still performing signal processing on the another frame (in other words we are not in the transmit state). Also why do we have to tell the USRP the end of data? Would this close the session completely or basically it would after transmitting the all the data in buffer turn off the carrier, etc.? 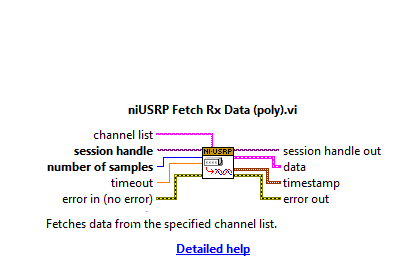 Same confusion arises for Rx VI. Now if i define the number of samples to be equal to the total samples expected for the whole message, would the output of this VI be the whole vector containing all those symbols? Or when this is called whatever data is inside USRP buffer, it is given into the PC memory and that is the output. Also what is timeout in this context aswell? Is it telling the USRP to collect the amount of data in given time?

HI have you Seen these?

They explain in detail all the inputs/outputs and workings of the VI.

There are only two ways to tell somebody thanks: Kudos and Marked Solutions

I have seen it. It clearly does not answer my questions well.