Recently, I have receive a new equipment Incubator (oven heat) BINDER BF56 with a ethernet port, I freeze the IP address to 192.168.0.2 and my usb adaptor ethernet  at 192.168.0.1 this configuration work well with manufacturer software.

I close all software and I test ping in command windows , it is OK....

So I try to communicate with NI MAX with add TCP/IP instrument but no answer of instrument (see photo...) 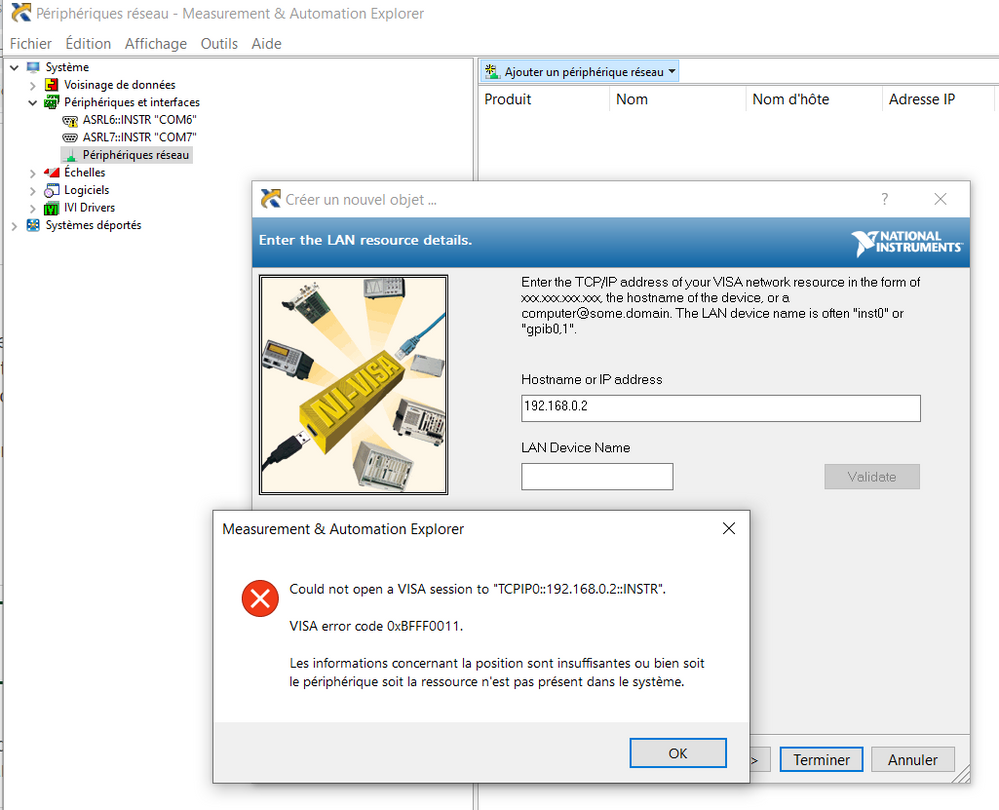 Please can you help me ?(if you can, answer in french, please)

In order to be seen in NI MAX as a VISA resource, I think it needs to be LXI-compatible.  Otherwise you need to address it with LabVIEW's TCP functions.

(Mid-Level minion.)
My support system ensures that I don't look totally incompetent.
Proud to say that I've progressed beyond knowing just enough to be dangerous. I now know enough to know that I have no clue about anything at all.
Humble author of the CLAD Nugget.
0 Kudos
Message 2 of 6
(112 Views)
Reply

Thanks for your answer, but I already test with TCP functions, and it's the same thing, no open connexion is possible at this IP address.

I don't known if my equipment is LXI-compatible.

Binder BF series is not LXI compatible (because nowhere it says it does) - so you cannot use VISA with it, no use in trying to add it under NI MAX.

Thanks for your answer, but I already test with TCP functions, and it's the same thing, no open connexion is possible at this IP address.

I don't known if my equipment is LXI-compatible.

I just took a quick at their website and could not find anything relating to communication except for their proprietary software.

Do you have a manual for this device? What does it say about remote control?


Binder BF series is not LXI compatible (because nowhere it says it does) - so you cannot use VISA with it, no use in trying to add it under NI MAX.

The INSTR flavor is for devices supporting the LXI or VXI-11 communication. It doesn't need a TCP/IP port number since that is implicitly defined by the LXI and VXI-11 standard.

If the device does not support LXI/VXI-11 you have to either use the native TCP nodes or the VISA SOCKET resource. Here you need to specify not only the IP address but also the port number on which the device server is listening.

And you need of course a documentation of the protocol that your device is talking. Without that it gets cumbersome. You could use a software like Wireshark to log the network traffic between the manufacturer software and the device, but depending on the character of that protocol (for instance binary data instead of ASCII) that can be difficult to almost impossible.

PS: Came across a manual for the APT-COM 3 software which stated that it was developed in LabVIEW and was using the LabVIEW runtime engine. Unfortunately this only means that Binder (or whoever developed that for them) does have LabVIEW routines available that can talk with their chambers. It states nowhere that they are willing to share their VIs or even just the documentation about their protocol in any way.

PPS: There seems to exist a techspec from Binder about the Modbus protocol for their chambers. It is unclear if this is generic for all chambers or if there are significant differences in what Modbus registers are used between the umtien series of chambers they manufacturer. If the TCP/IP protocol as observed in a Wireshark dump turns out to look binary in nature, there is a very good chance that it is basically the modbus protocol transferred in TCP/IP frames. This could be Modbus TCP or it could be a proprietary wrapping of the Modbus binary data in a TCP/IP dataframe.