LabVIEW on Apple Silicon M1 and beyond

LabVIEW on Apple Silicon M1 and beyond

LabVIEW was inspired by and born on the Mac.  Wouldn't it be great to see it born again on world class hardware! 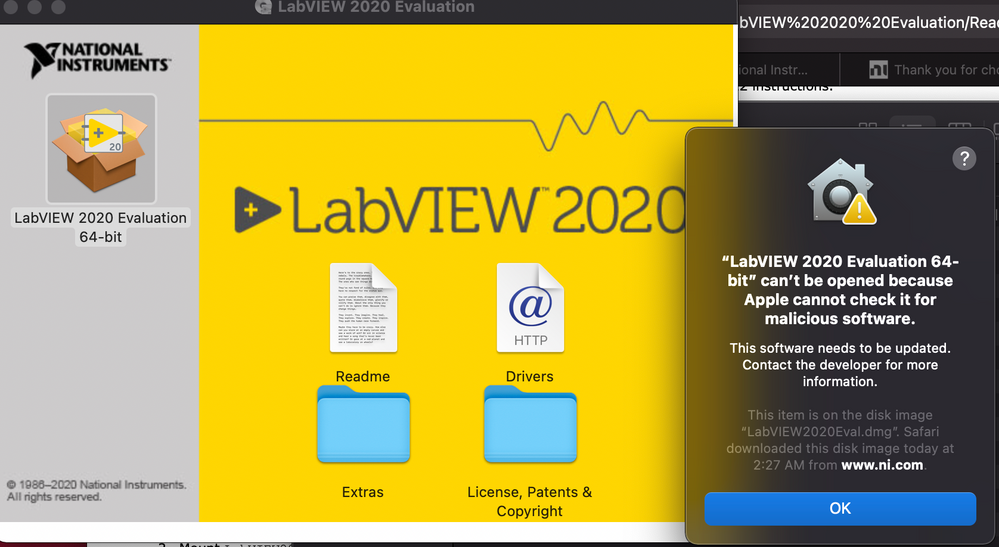 Screenshot from my MacBook Pro (M1)

Dear Carsten, Were you able to override that message in the system preferences? Lab-view has been saying that for some time even on intel macs unfortunately and the only fix was to go into Security and Privacy to choose install anyway.

I’m considering an upgrade, but need to use Labview so I would appreciate any news on wether you got it successfully install.

I haven’t tried and would suggest that NI support and engineering answer the question.

But the purpose of my post was to point out the obvious: If the M1 succeeds its initially successful take-off, it will put pressure on NI customers to benefit from its performance.

As I'm trying to recall my Mac history, I remember a product that worked for a very niche group of folks, primarily graphic designers, while generally being viewed as a superior bit of hardware.  Being stuck with the niche was due primarily to a small user base combined with developers not looking to spend a great deal of extra effort to upkeep a special set of source to deal with a proprietary hardware setup.

Fast forward to Macs using the x86 architecture and now cross-platform development was a much easier task.

Fast forward to the new decision.  Apple is trying to avoid the past problem by making their new applications easier to develop, especially for applications currently designed to run on iOS.  But, if you weren't looking at iPad/iPhone dev, it'll be a pretty significant cost to maintain support for newer Macs with no real guarantee the hardware won't change drastically and cause more heartache for support down the road.

I wouldn't be surprised to see a number of developers drop out of the Mac game.  It was already struggling in tech circles when it had the x86 support.  Now, it's a costly endeavor with likely little payoff (how many people fit into the Venn diagram of LV users and Mac advocates going out to get the new hardware, for this specific instance.. and similar questions for other tech software).

While I doubt Mac will lose the market share and go back to the days of struggling pre-x86, I wouldn't be surprised to see they've removed themselves from engineering markets entirely with this decision.

"World class hardware" without software to take advantage is just a world class paperweight.  I'm not sure about others here.  Though, I'd rather see more work done on LV than work spent to get M1+ chip support.  Wouldn't you?

My post is a reflection on potential inflection points in the industry.  The graphical interface on the early Macs played a key role in inspiring the work of Jeff Kodosky in inventing LabVIEW.

As time went on Apple lost its way in the woods and nearly died in the late 1990s.

When I worked for NI in the 1990s Dr. T. was always focused on the technological driven innovations, including bus technologies, CPUs, and software platforms. And as you nibble at each of these, some work out, and some don't.  For example, LabVIEW on Solaris and HP-UX didn't.

The market share of Windows pulled NI to support it, as the first platform after the Mac.  That was a wise decision considering the near demise of the Mac and the tremendous growth of Windows acceptance.

As NI progressed in the 1990's, Dr. T was keen on eating the big guys, from the bottom up, where a small, nimble but unthreatening competitor successfully attacks the giants, in that case, HP.

My hypothesis, is that Apple has quietly been paving the way for this kind of attack.  From near bankruptcy, Steve Jobs installed a focus on simplicity that drove Apple to being large, chip-design powerhouse, powering innocent-looking smart devices. Certainly no threat to the grip of Intel and Microsoft on the corporate industrial customers.

Nokia, Ericsson and Blackberry looked at the iPhone as a cheap, lousy phone, which indeed it was in the first few generations. But its vision of the future captured many, and today that vision has been realized, and created one of the most admired, copied, and sometimes hated products.   And Nokia, Ericsson, and Blackberry are footnotes.

Now iPhone technology is moving rapidly to "traditional" computers, first in the form the M1 chip in the MacBook Air. It's an entry-level product looks just as innocent.  But it is not innocent.  Its a highly efficient, high performing powerhouse. No noise, very little heat, extremely high single-core performance and lots of dedicated hardware on board to accelerate digital signal processing.

I bought one a few days ago, and am shocked by how well it performs.  Its like doubling the speed of your car while cutting the gas mileage in half.  That is revolutionary.

The semi-conductor team at Apple is world class, with access to the world's best semi-conductor technologies. Putting these chips in the lowly but popular MacBook Air is significant because it is the first product of a planned two-year transition away from Intel. This will build a high-volume base, which will lead the migration into the higher performance products such as iMac, game consoles, and ultimately the highly modular Mac Pro.

My hypothesis, is that the hardware excellence, will drive Apple market share in corporate markets.  Their phones and iPad were almost instantly accepted by high level management.

This increased market share will drive more demand for the product, assuming that it keeps it technological lead. And the arguments you present, illustrate why some corporate giants don't yet see it is a potential candidate mainstream product.

It doesn't have the industrial and corporate strength software, the modularity/build your own, and customizability.  But, I see the future is moving to extremely tightly integrated processors. The laws of physics dictate that the only way you get increase speed, is make things small. And small requires low power consumption.  Customizability will then be in the peripherals that you can put on external busses.

So this is my working hypothesis.

Time will tell if my "marketing" ends as a dead-end paperweight,  but I believe it would be wise for NI to hedge its bets and start a skunkworks M1 LabVIEW group.

I just noted today, that NI announced back on Nov 26 the discontinuation of NXG.  I think that NI may have come to the recognition that NXG was overly ambitious, and perhaps also too dependent on Microsoft technologies to ensure platform independence.  Also the emergence of Python in the open source analysis community has put pressure on both MatLab and LabVIEW.

I hope that NI in its re-deployment of NXG engineering resources will be successful in meeting the challenges and opportunities ahead.

A quick word to let you know my early finding about LV2020 SP1 released a few days ago.
I've (force) installed LV2020SP1 on an Apple Silicon M1 Mac mini running Big Sur.
LV warns that this OS is not supported and that the hardware is not supported either, but still accept to install, thanks NI for letting us try.
It is seen as an Intel application -> runs in emulation.
The "editor" seems as fast as on a true Intel machine. Rosetta2 seems very efficient.
I don't have VIs to benchmark LV execution, but the examples I played with do not seem to be slower than on Intel.
A did some very basic testing
The continuous Sound Input VI works and ask for the mic access to be granted 🙂
Type the following command to fix project opening:

LV will crash as soon as you try to open a project if you don't enter the above command
I could test my Video grabbing VIs once I allowed my DLL/Frameworks in System Preferences Security and Privacy.
This us VERY encouraging for an explicitly unsupported OS and hardware 🙂

Let see how DAQ will come into play with LV2021

Thanks for the update.  Unfortunately, it says the my Community license has expired when logging in to activate. Download and try again.  And it still says my Community License is expired after uninstalling and downloading and installing again

Background history: I previously had the 2020 Mac Evaluation version installed and have uninstalled it by running the uninstall script.

So I am stuck.

Any suggestions?  Or is the issue that the community edition web update software for 2020f1 hasn't been updated yet?


Thanks for the update.  Unfortunately, it says the my Community license has expired when logging in to activate. Download and try again.  And it still says my Community License is expired after uninstalling and downloading and installing again

Background history: I previously had the 2020 Mac Evaluation version installed and have uninstalled it by running the uninstall script.

So I am stuck.

Any suggestions?  Or is the issue that the community edition web update software for 2020f1 hasn't been updated yet?

These instructions may help you.

(Mid-Level minion.)
My support system ensures that I don't look totally incompetent.
Proud to say that I've progressed beyond knowing just enough to be dangerous. I now know enough to know that I have no clue about anything at all.
Humble author of the CLAD Nugget.
0 Kudos
Message 9 of 12
(1,420 Views)
Reply

New challenge of the day: install windows version of LV2020SP1 on m1 🙂

there are issues with DAQ drivers (ede), did not try all the options...

So Microsoft x86 emulation in Windows10 arm preview seems to do its job.

Would have been much simpler if Parallels does the emulation, we could import x86 VM directly.

.. or via Apple which actually also does it using Rosetta2

Anyway this should not refrain NI to develop a full LV suite (i.e. with DAQ) on M1 processors 🙂