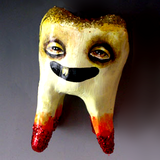 Text-based programming languages use vertical execution order because lines of text take up far less space when stacked vertically. The same is true for LabVIEW block objects that contain text. These objects tend to be much wider than they are tall, and take up less space if arranged vertically. So why is LabVIEW data flow set left-to-right to encourage horizontal arrangement of wide segments of text? It’s because LabVIEW was developed by 14th century samurai, who used tategaki, or ‘vertical writing’. I don't think your original statement "Text-based programming languages use vertical execution order because lines of text take up far less space when stacked vertically" is valid, and I'd like to see a reference for this claim, but... I thought the rest of the post was friggin hilarious! Awesome.

Clearly the Japanese were WAY ahead of us!

I never did understand the red/blue wires going into the addition primitive for the LabVIEW logo. What data type are they? Must have been a sales/marketing call for aesthetics.

Interesting, but it runs counter to a theory that Socratis Kalogrianitis (the original host of the Info-LabVIEW group) shared with me many years ago. It was his position that LabVIEW was actually the primary software development environment utilized by the ancient Greeks. And I must say his logic was flawless...

Consider that the word "programming" comes from two Greek roots: "pro" meaning "before" and "gramma" meaning writing. So the root meaning of the word is "before writing".

Now what came before writing? Well drawing pictures, of course.

And how do we create LV programs? by drawing pictures!

And there you are...

Root Canal does have nicer graphics though...

Options
I don't think I've ever laughed so much about anything LabVIEW!
0 Kudos
Message 6 of 16
(9,092 Views)
Reply

Options
Can "Zen and the Art of VI Maintenance" be far behind?
Data Science Automation

Leave it to a Samurai to figure out how to drastically cut software development time....

LabVIEW was actually the primary software development environment utilized by the ancient Greeks. And I must say his logic was flawless...

Although i am Greek, I had never thought it