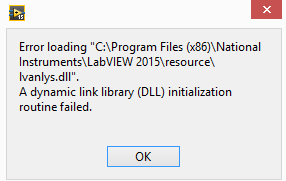 Of course I googled the error found ALL THE TOPICS ON THE NI FORUM and tried to use other people solutions such as:

-Uninstall LV 2015, download new installator (both with the usage of NI downloader and with simple .exe download) and install again

-MSIBlast EVERYTHING from NI and install LV 2015 again

My pc has no problem with multiprocessor stuff (Like here and here) and I really run out of ideas and would appricieate any help.

I don't know if it helps, but is there any difference if you boot the computer in fail-safe mode?

I assume you installed labVIEW full or higher. (I am not 100% sure if LabVIEW base includes lvanlys.)

I also assume that you installed LabVIEW 2015 32bit, is this correct? Did you customize any install locations or was everything left at the defaults?

Are you running any unusual AV or security software? Any other admin restrictions? What is the OS language? Did you reboot after installation?

I simply installed LV 2016 and have no problem with any .dll's.