An error occurred while communicating with the compile server.

An error occurred while communicating with the compile server.

Got a problem with compiling FPGA code. It has worked without a problem for a long time but suddenly this happens. 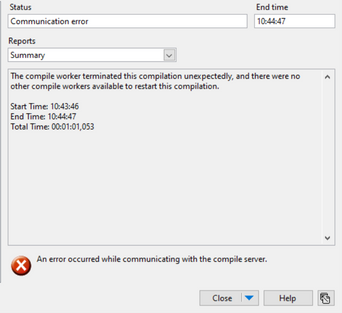 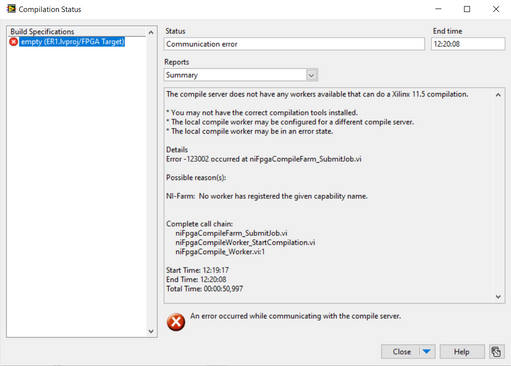 First one I get when I restart compiler as admin (first run), second when I try to connect to an compiler that I have used before.

Everything runs on Windows 10. It is an older system with cFieldPoint and cRIO-9074 so I use

I have cheked this:

and tried the following without success:

- running compiler on another PC

- compiling original project that was working on the compiler in November

- forcing reinstall of Xilinx 11.5 (setup.exe /reinstall) - as far as I know this installation of LV does not allow reparation/uninstallation of single module.

Any tips? I assume that the worst case scenario is to reinstall everything, but would like to know if there are other options and whether the re-installation can actually help in this case.

Re: An error occurred while communicating with the compile server.

Maybe it will sound stupide, but have you tried to restart the cRIO device?

and let's understand, what exactly happened. What did you changed or what was done for you to have a need recompiling it?