Labels
Idea Statuses
Top Authors
View All
Turn on suggestions
Auto-suggest helps you quickly narrow down your search results by suggesting possible matches as you type.
Showing results for
Search instead for
Did you mean:
Post an idea
Options
151 Kudos 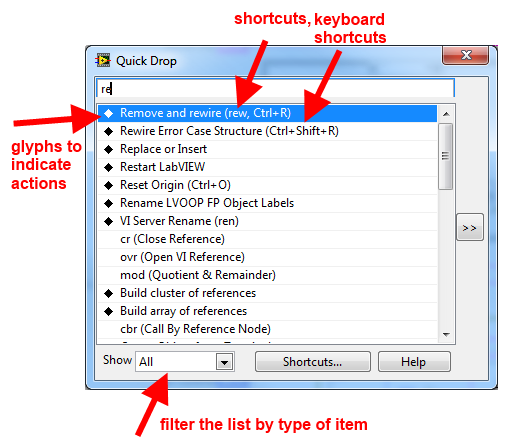 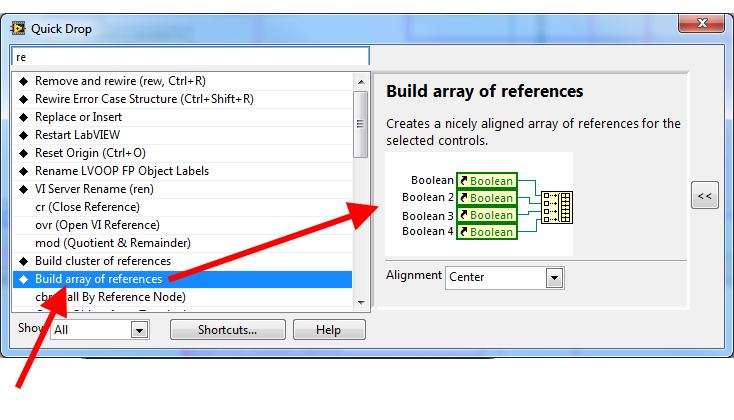 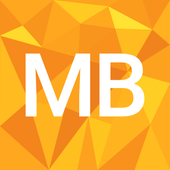 Suggestion: Double clicking a connected terminal on the connector pane highlights and jumps to the connected control. This would be useful for controls that are off screen or hidden.

Similar behavior to double clicking the associated terminal/icon on the block diagram, where it automatically repositions the front panel's view.

Certification Should Not Expire, they should be linked to a LabVIEW Version

When your certification expires, do you instantly forget everything you knew? Of course not.

I think QControls are useful enough for all LabVIEW users that they should be part of the LabVIEW core product instead of an add-on toolkit.

I would like to be able to create executables that don’t require the runtime engine in LabVIEW. Perhaps a palette of basic functions that can compiled without the runtime engine and an option in the application builder for that. I routinely get executables from programmers that don’t require a runtime installation. I just put it on my desktop and it runs. It would be nice that if I get a request, I could create, build, and send them an exe in an email without worrying about runtime engine versions, transferring large installer files to them, etc.

The ability to add and remove plots from the properties page

After placing a new graph, we might want to go to the plot properties dialog and change the color, label, etc. of the plots we want.

Bzzzt. No go! We can only edit plots that have been added in some other way. (by resizing the plot legend, wiring and running once with data representing several plots, etc.)

For comparison, have a look at the cursor tab. Here we can add and remove cursors at will.

My suggestion is to add the ability to add or remove plots on the plots tab properties page of graphs and charts.

It could look like in the image on the left.

being able to rotate some indicators, controls, graphics or anything else

Being able to rotate some indicators, controls, graphics or anything else would be great in my opinion.

Indeed, for example, when you have to represent an electrical circuit in your HMI, you must have several images of the same component with an angle of rotation of 0°/90°/-90°/180°.

So allowing a LabVIEW user to rotate some elements with an angle which could be set, would be more convenient.

Four images for one element. If we have 2.000 différent elements we must store 8.000 images. I'm telling my strudents how they should use the error cluster and how important it is. In subvis no error dialogs should be shown and so on (see topics of LabVIEW Core 1 / Core 2).

But many VIs written by NI have been programmed very sloppy. Please check all of your VIs and do a revision that we can make well-coded applications where the error handling will work correctly.

Help! I need a way to pack more Classes onto my Block Diagrams!

This idea is simple and quite subtle- reduce the size of the Class Constant on the Block Diagram. The majority of the footprint belongs to the Class Icon, which cannot be sized smaller, but the additional border graphic that creates the "Object Cube" effect can be reduced to give a total footprint of 42x42 pixels down from 48x48 pixels. (If you're counting, that's a 42% reduction in "fluff", discounting the 32x32 that must remain!) If you're not crazy about the first-draft artwork, feel free to post a new rendition in the Comments section!

Is LabVIEW available for Android based systems and other touch interface systems.If not how about using LabVIEW for mobile measurements using these systems. 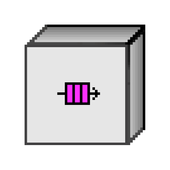 This idea came from customer Jason Willis during an NIWeek 2012 brainstorm session with LV developers. To me, it seemed like a good idea, so I figured I would post it to the community to flesh it out and see what kudos it gets.

When you have a reentrant VI, you have the one real VI and many clone VIs. Debugging the clones is hard. One way to make it easier might be to make the probes behave like the breakpoints do.

We could make probes do the same: if you put a probe on a real VI, any time the block diagram of a clone gets opened, a probe would be added to its wires in the same locations as on the real VI. If you removed the probe from the real VI, all the duplicate probes on the clones would go away too. But if you added a probe to a clone, the other clones would not get a probe.

I'm totally on board with Embedding Labels for Property and Invoke Nodes! Here are some additional improvements to those nodes: Often, when modifying code, I need to reduce the size of a structure due to removing code.  If I have a nested structure system (e.g. event structure in a case statement in a loop), this can get very tedious.  It would be nice to have a "shrinkwrap structure" functionality on the right-click menu as a counterpoint to the autogrow.  This would be an action that would reduce the structure size to something a bit bigger than the largest contents.  An option to set how much extra space to include would be nice.

Key Focus Surrounding Border - Let's Get Rid of It!

Whenever you use the KeyFocus property, or simply the tab key on a running VI, whatever control has key focus gets that ugly black border around it.  Can we just eliminate this feature, or at the very least, have the ability to disable it?  The border doesn't appear on System-style front panel controls, but it does for anything else.  I've written all sorts of hacks over the years (the latest being in Quick Drop) where I have to figure out a way to hide that ugly border when a control gets key focus.

Sort arrow in column headers of tables and listboxes

In general I would like to see LabVIEW more in line with the OS GUI standards. We have dialog controls and colors, however they are not set up to be the default choice - and we lack other GUI elements like status bars, notify icons, child windows etc. etc. A large part of LV-programmers' time is spent on ways to get LV to mimic what users will recognise and therefor intuitively understand.

In this case I simply miss the "sort glyph" that indicates that a table or listbox is sorted based on a given column and in which direction.

I imagine we could show or hide this and set its direction with a property node...It would not handle the sorting (although that would have been neat as well - if you had an in-built sorting that just needed to know a few parameters about the column data to do the job)...

The idea is simple: if the label ends in a number (i.e. consecutive string of numeric characters), increment that number: 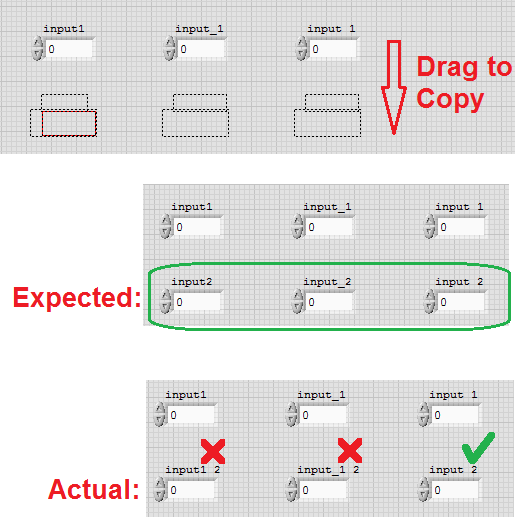 It seems like it only works if there is a space character. If there is a good reason for doing it that way, help me understand what it is.

I linked some similar ideas below. I like these discussions for the most part, but they tend to have broader scopes than what I'm suggesting.

Let's have a look: If we specify a custom font, we get a dialog that has confused me since I started out with LabVIEW 4.0 way over 10 years ago. Especially the two checkboxes in the lower left corner have bugged me since day one, because they are very confusing.

This font dialog needs to go and be redesigned from scratch!

Why not make the Font options a bit more intuitive. Here's a quick draft. Even if we select the default font, it should show what it is but have the parts on the right greyed out.

It probably would need a small preview area below each selection (not shown). Each can be much smaller than the current preview window. (It does not matter if a 500pt font is clipped a bit.) 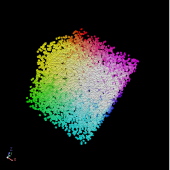 I sometimes delete controls from the BD and realise some time (from milliseconds to minutes) that I have some broken local variables.

I get greeted by the hugely informative imagery as shown below:

Yeah, good luck realising what exactly you deleted by mistake.  No name, no way of finding out what the local PREVIOUSLY linked to.

I suggest retaining at least the name of the Control / Indicator the local was linked to so that the poor programmer (me) has some fighting change of undoing the error.  Bear in mind there could be many changes made to a VI before this kind of thing is notices so a simply "undo" fix could end up being VERY awkward indeed.

An example of how this could look:

Here I at least know WHAT I have deleted by mistake.

When entering debug mode (turn execution highlight on) it can be hard to see what is happening.

With event structures it can be hard, but there are subtile changes. Sometimes it's impossible. For instance, if you run this VI, and wait a while, it is impossible to why the VI has not stopped. In this case it's easy to deduce, but it can be really hard. Probes also don't provide a solution here... 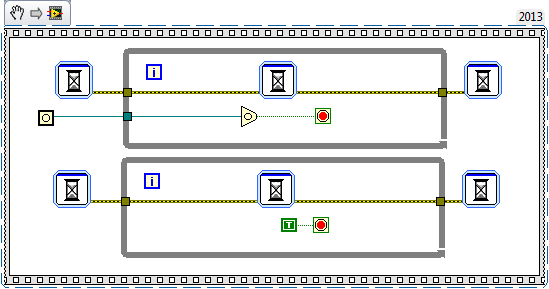 SubVI's get a green arrow when they are executing. So, could structures get them as well?