Labels
Idea Statuses
Top Authors
View All
Turn on suggestions
Auto-suggest helps you quickly narrow down your search results by suggesting possible matches as you type.
Showing results for
Search instead for
Did you mean:
Options
41 Kudos

give decorations a label property to address and modify them programatically

Sometimes it's very useful to modify a front-panel decoration element programatically. E.g. moving it, changing its size, color or visability. All of those properties do already exist.

Because a decoration element does not have a property node, it must be searched via the decorations-property of the pane. The problem here is, that there no possibility identify a particular decorcation element because there seems not to be any identifier property.

What I'm requesting to resolve this awkward situation is to give all decoration elements a label-text property (or any other identifier property) which can be set during programing time by the LabVIEW programmer. 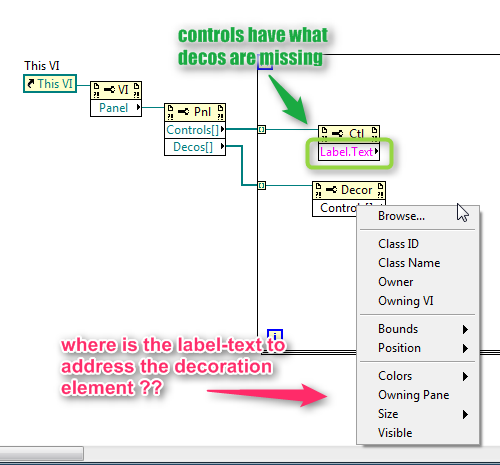 I actually would not mind this, there have been a few times I've wanted to do things like change a decorations color programatically, but trying to determine which decoration is which was too much a pain.

If you enable VI scripting (Tools->Options->Vi Server->Vis Scripting->Show VI scripting functions, properties and methods) there's a "UID" property node that you can access.  It's a number, but once you get it from a decoration it won't change on that VI.

Thank you 🙂 ... I already found this before I wrote my idea ... but for a "normal" programmer or beginner its too good hidden and much too complicated to use. So I wrote this label thing. Whereby I personally prefere the other idea where I can create a property node which is directly linked to a decoration.

Interesting by the way: There is already a label field in the property dialog of a decoration but it is disabled and greyed.

A label can be useful in a decoration,not only to identify it in the BD. Kudos!

This idea is already discussed in this one: Improved decoration and control graphics

but is one among other suggestions.

As I mentioned in my comment to your other related suggestion (also a duplicate), this is something that NI hasn't included in its Next Generation LabVIEW Preview, despite it being mainly focused on UI and changes to FP and BD graphics.

<OOT> Now, to be fair (!), there isn't ANY property nodes to be seen in this preview, which makes it something like a vintage version of LabVIEW of sort.

But this suggestion of yours made me take another look at the Preview (which I have given up playing with, so limited it is) and here is the shocker:

THERE ISN'T ANY CAPTION either!

At least not that I could find. So objects other than decorations have a label (it is called a "name"), but that's it. And of course, since there is not property node (yet), it doesn't really matter that much... </OOT>

This idea appears to be a partial dupe of Improved decoration and control graphics, but I personally like it more because it's more clear and straight-forward.

Seems like there was no any progress on this issue at all. Even in the recent LV versions we still cannot assign the labels to the decorations, still have that non-working "Label" field in the Properties, still have to use UIDs or Tags to identify the decorations... Why such simple things became so complicated?

I think, it would be a good idea also to have any objects UIDs shown in their Properties, so it would eliminate the need of using Heap Peek or cumbersome scripting roads to get the target UID(s).

It would help if we could get a static decoration reference...

In LV11 (IIRC) and higher, you can actually go to Properties>Appearance and set the label... It will be removed though. I think there is a CAR to actually remove it from the dialog