When i open the VI Properties dialog for a new VI today, using ctrl+I, file dialog or right-click in project, this is what I get: 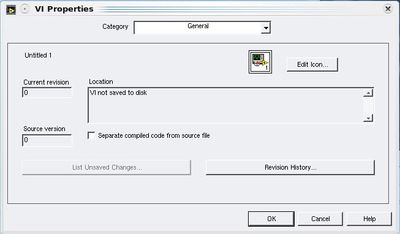 In most cases what I want to do is to edit the Documentation, which I do for every VI I create. In the majority of my VI:s this is the only property I set. I also edit the icon although I personally don't do it through this dialog. However, if I open this dialog from a project I believe that the general tab is a good starting point. Hopefully I did the documentation when I created the VI.

My suggestion is that you go to the Documentation tab if the VI Proerties dialog is open from the VI. Also, I suggest that the "Edit Icon..." button is moved or replicated to this tab. Finally, I suggest that this button is linked to Ctrl+I in the dialog, so that you can press Ctrl+I+I to go directly to the icon editor from the vi. The current behaviour that the last used tab is shown again should remain, this only applies to the first time the dialog is opened (which makes it necessary to allow for Ctrl+I+I in all tabs which might be a challenge since I guess they're not tabs at all). 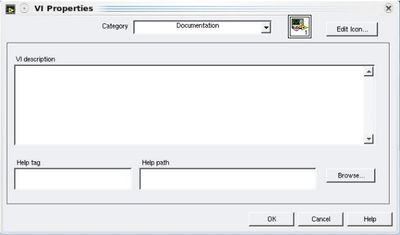 Just a small step in the hunt for those extra mouse clicks that really don't take that much time, but are kind of annoying.

I agree that easier access to the VI Documentation should be provided.

If changing the program default for VI Properties is not considered, making it an option which the developer could set would work.

Another option might be to add a menu item to go directly to VI Documentation from the pop up menu or a keyboard shortcut.  This is analogous to the Display Format.. menu item for a numeric control which takes you to the appropriate tab of the Properties dialog.