Labels
Idea Statuses
Top Authors
View All
Turn on suggestions
Auto-suggest helps you quickly narrow down your search results by suggesting possible matches as you type.
Showing results for
Search instead for
Did you mean:
Options
65 Kudos

Title basically says it all but I'll elaborate.  With increasing monitor resolution, a 16x16 glyph on a listbox doesn't work very well.  On a 4K monitor this is awful tiny.  This idea is to support larger glyphs in Listboxes, Multi-column Listboxes, and Trees.  Glyphs are used in several places but on favorite of mine is to have item selection with checkboxes, example here.  Allowing for these glyphs to grow with the row height would make them appear more cohesive.  There is a thread discussing this topic, and a work around involving an array of picture rings that is placed over the listbox control.  Here is a demo from that thread: 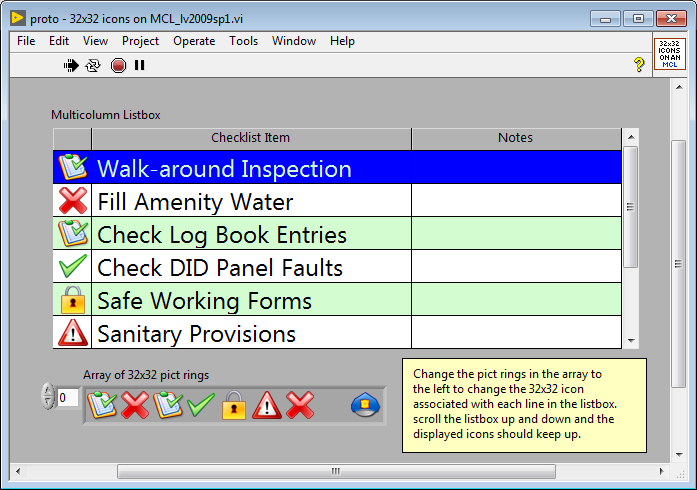 This work around is fine for simple things but doesn't scale well, and doesn't support trees easily.  I for instance want to have two trees, where a user can drag and drop from one to the other with the larger glyphs coming along with the drop.  Having to handle where the user dropped, and then dynamically building the glyphs to overlay on top of the tree, with indentation, and hiding when a tree's leaf is closed is a major pain.  Please NI add a feature allowing for larger glyphs, and I would be so happy.

This is the kind of UI change that is unlikely to be made in LabVIEW 20xx. It is already on the roadmap explicitly to make this possible in LabVIEW NXG. This idea will remain open until LabVIEW NXG is ready to act on it.

Totally understand this response.  However NXG does not seem like an upgrade path we will be taking until feature parity is much closer than it currently is.

Thanks for linking to the others, I did a search before posting but for some reason didn't find those.