Labels
Idea Statuses
Top Authors
View All
Turn on suggestions
Auto-suggest helps you quickly narrow down your search results by suggesting possible matches as you type.
Showing results for
Search instead for
Did you mean:
Options
12 Kudos 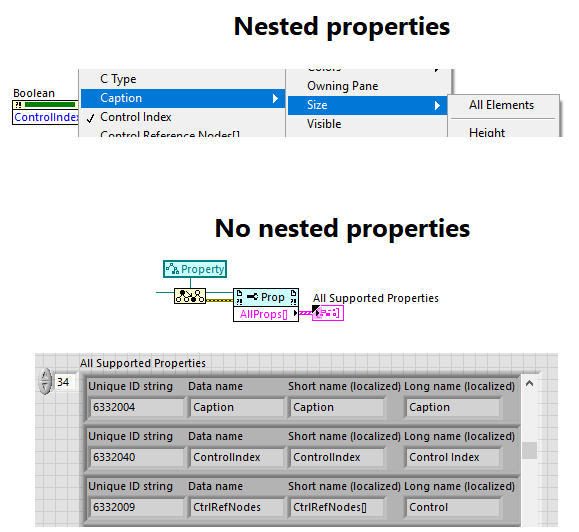 Instead, I want either this property or a new property to return all of the nested properties as well, just like you get in the UI.

This would be useful for setting properties using scripting and alternate UIs (like this one or this one, which can't work today, because they can't get the full list of properties).

There is a change of an endless loop of course.

For instance, "Label" has an "Owner". "Owner" should not be traversed, or we'll have an endless recursion. There might be less obvious recursion problems...

To be clear, the property should return everything that's in the selection menu. In the case of Label.Owner, it has no more levels in the menu, so there's no reason to return anything beyond that level.


In the case of Label.Owner, it has no more levels in the menu, so there's no reason to return anything beyond that level.

I wander though if this new property should replace the old one, or if both should exist? Or a Boolean input?

It's not immediately obvious, but the Long Name Localized cluster element of each property has a colon-delimited list of the property hierarchy (eg, "Bounds:Area Width"), so you can count the colons to get each item's nest depth in a tree.

The problem with that is you need to have a property in the property node to be able to use that. While it would be possible (and ugly) to copy the node to a temporary VI and expand it there, it looks like the expansion doesn't set the nested properties in the node, so that still brings us back to the same point.

I looked at your example more, and I agree that some nested elements are not available. But some are (consider Data Entry Limits). The discrepancy seems more like a bug than a missing feature. Frustrating indeed!

Data Entry Limits, as well as others, are clusters. They are made up of subelements, but they are all fully owned by the object the property node is linked to (a numeric, in your example).

The items that don't appear in the list are those which are owned by subobjects, such as the label or caption. The Caption property itself appears in the list, as shown in the original screenshot, but that just returns the top level property, which is the reference to the subobject. It doesn't return all of the properties owned by the subobject itself.