Labels
Idea Statuses
Top Authors
View All
Turn on suggestions
Auto-suggest helps you quickly narrow down your search results by suggesting possible matches as you type.
Showing results for
Search instead for
Did you mean:
Options
20 Kudos

Could it be possible for LabVIEW (even if only for versions 202{1,2,3} onwards etc) to make an attempt to open newer files and just break them when new features are used?

The comments in this Idea (LabVIEW Compatibility Modes) suggest this and related ideas, but it isn't the main part of that idea, so I'm posting it separately here.

An ideal solution for me would be for VIs to automatically save back in the 'oldest' version that they would support (and perhaps not be 'up-compiled' on load), but this idea has been discussed a few times and doesn't appear to be something NI will support.

An alternative (perhaps only possible in currently unreleased versions?) might be to have LabVIEW 202x try and open a VI saved in 202<x+n>, and then give the symbol for missing VIs (ideally with the name, if possible) for anything that isn't supported.

As an example, trying to open a VI using Insert into Map (if this were available for existing LabVIEW versions) in LabVIEW 2018 could produce something like 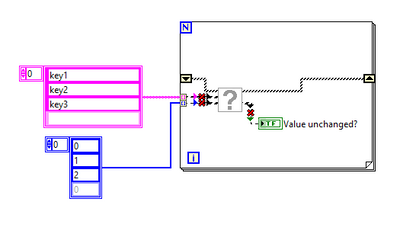 with the Context Help giving me a clue as to what was lost - I could then Google "Insert into Map LabVIEW" and try guess how I might replace it (here, probably with Variant Attributes).

I'm posting this idea in relation to some comments I've recently heard regarding sharing and packaging code with LabVIEW, and how even when other (text) languages add new features and so code using them will fail to compile, their users/developers can still open the code, try fix bits, or generally workaround issues (and evaluate the benefits of upgrading, if the changes are large).

New versions of LabVIEW continue to have significant new features, so upgrading seems like it will continue to be at least my preference, but not everyone has the same requirements/situation/SSP/blah blah blah.

I'll try to spread the word.

@felipe.foz: There isn't much for NI to say on the topic. It's an idea that is kind of self explanatory and clearly useful. It would also be very expensive to implement with the way VIs are saved. NXG had been designed to allow this; LabVIEW is not. It's on the list of ideas we might lift from NXG. The kudos is one way to guide the priority.