Labels
Idea Statuses
Top Authors
View All
Turn on suggestions
Auto-suggest helps you quickly narrow down your search results by suggesting possible matches as you type.
Showing results for
Search instead for
Did you mean:
Options
86 Kudos

After some searching, this ideas was already discussed in the comments of this declined idea. but I think it deserves to stand on its own, so here we go.

We have a nice menu entry "Menu...Edit...Make current values default" that (if nothing is selected) does just that. In 99% of my cases only the controls are important, because all the indicators, while often containing tons of data (graphs, arrays, etc) can be easily re-created from the control values at any time.

So while the control values are useful to be able to run a VI out-of-the-box with reasonable input values, default values for indicators just contribute to VI bloat, increasing the size on disk.

Making indicators default is useful for the rare cases where a forum users want to show what he gets or expects to get, but not in general development. Yes, we can of course select all controls first, but they might be scattered all over the panel and over several tab pages, so that's not a good solution. (We could also request a menu in addition to the "edit...select all" e.g. called "edit...select all controls", but that is probably a different idea.)

In summary, there should be a menu entry that ignores indicators when making values the default.

It should also work if multiple items are selected "Make Selected Control Values Default", in which case it would ignore any selected indicators. 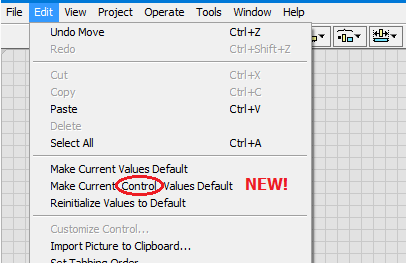 Here is a recent example showing why indicators should typically not contain default data. Maybe the new menu entry should be on top.