Labels
Idea Statuses
Top Authors
View All
Turn on suggestions
Auto-suggest helps you quickly narrow down your search results by suggesting possible matches as you type.
Showing results for
Search instead for
Did you mean:
Options
23 Kudos

Make App.Version return the application version, not the Run-Time version

I use the application version in splash screens etc. - however today I have to manually write this multiple places because I cannot read the version number I used when building the application.

It's probably too late in the game to change what App.Version means, at this point. 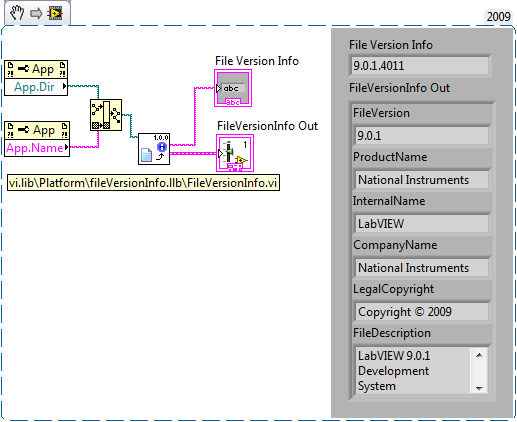 Thanks for the snippet. I was aware of the file info way of getting the info, but I still think they should correct the current behaviour.

You worry about the consequences if they do a change, but they already do this automatically for other incompatible upgrades when new versions of LabVIEW come out...I think they should add a property that returns the RTE version and do a replacement of the App.Version nodes if LV is asked to open a VI from an older version of LabVIEW. That way App.Version can be reserved for the version of the built app instead.

Generally - if there is one thing you (NI in thios case) should not start tolerating in an application it's small illogical operations. They do not have a big impact on their own, but make it a trend to accept such features... and soon they add up to less happy users....

Thanks, THis is just what the doctor ordered.

Unfortunately this work-around appears to only work on Windows executables and not on RT. Any update on resolving this so that the app.version reflects the correct information?

We believe that the current behavior is the correct behavior. The existing App.Version property correctly returns the version of the application that is running. Your user code is hosted by the run time engine. We might change this except that knowing the version number of the runtime engine is important to many applications that are trying to talk to each other across various communications protocols, so this is not a property that we would want to lose.

In what way can I obtain the version information of the user code without having to reference the .cdf file which only updates this information if you deploy the startup application through the MAX software wizard?

No idea. What I posted above was regarding the suggestion to change the existing property. Adding a new property to get some other piece of information is a different idea.

" The existing App.Version property correctly returns the version of the application that is running. Your user code is hosted by the run time engine."

This may be technically valid, but  I do not think it is valid/representative for people developing applications (!) in LabVIEW.

The Run-Time-Engine is just a necessary support package. As long as we have the application builder etc. (not the "user code builder"), people will view the resulting executable and their work as the main part of the app, the rest is just the RTE. (That's also why a print-out from the application should report itself as coming from the given application name, not LabVIEW(!)...so changing this in-house perception might fix other annoyances as well.)

App.Version property should return the version number set by the application builder, and then there should be a separate property called the RunTime.Version. The fact that this was not chosen earlier does not make it any less correct, just much messier to fix in the most correct way.