Labels
Idea Statuses
Top Authors
View All
Turn on suggestions
Auto-suggest helps you quickly narrow down your search results by suggesting possible matches as you type.
Showing results for
Search instead for
Did you mean:
Options
36 Kudos

File Path Control Support Sytax for other OS than the local one.

I think it is very difficult to make a UI that runs on Windows and interacts with targets. Here are two suggestions to improve this:

1. We currently can't have \c\ format style in a file path control on windows. It would be nice to allow user to specify the OS syntax to use instead of assuming it should always be the local sytax.

2. The icing on the cake would be to have the File Path Control support a property node for an IP Address so when the user clicks on the browse button, it automatically browses the target (this is already an idea mentioned in the link below) and uses the syntax of the target. This becomes especially useful as we start to have targets that may have an alternative way of browsing files besides FTP. It would be a pain to figure out which SW is installed on the target and use the correct method to enumerate files/folders.

These two features could be implemented by having an enum property node for the File Path Control called Syntax which include options like: Local, Various OSes (Windows, Linux, Mac, etc), or IP Address. If IP Address is specified, another property Node called IP Address will be used to determine what target's OS to use (if it's not specified or invalid, we default to Local).

Your first point definitely has my vote!  I dislike having to store my paths with Linux syntax as a string when opening the code under Windows. 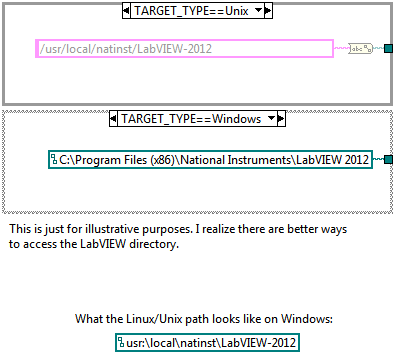 I think your first suggestion has some use cases. Your second point might be harder for NI to implement. However you could write some code to figure out the target OS and through a property node, adjust the OS syntax of the path control.

Unfortunately, you cannot make the path control on windows use the syntax for a different OS. Are you talking about a new feature for a property node on the file path control to set the OS syntax to use? If so, I agree as I mentioned above this would be nice, but I figure while I'm asking for something, might as well ask for the stars and see what will happen.  Thanks for the feedabck...Brad

Yes, my suggestion would be for a new feature in the form of a new property. Trying to make it easier for NI to implement 🙂

Perhaps even giving the possibility to use a different path for the different systems. I mean C:\ has no meaning in a nix environment. While /usr/ will in no way work in windows.

I admit it is a long shot but it will improve the functionality.