Labels
Idea Statuses
Top Authors
View All
Turn on suggestions
Auto-suggest helps you quickly narrow down your search results by suggesting possible matches as you type.
Showing results for
Search instead for
Did you mean:
Options
13 Kudos

Spurred by Darren's latest nugget, I think it would be an excellent addition to the feature to be able to retain wire values for all subVIs of a particular VI as well as the VI itself. Several times, I have found myself having to run a VI a couple times to get to the point where I can satisfactorily examine the data flow. There is a JKI RCF plugin by Vishal posted here which implemented this, but native functionality would be much preferred. 🙂

I'm not sure how best it could be implemented in UI so as not to disturb those who don't want this, and I can forsee a hairy situation arising if a particular subVI is called from a different hierachy later. Ideally, the subVI would retain values for the last execution in the retained hierachy, but obviously that's incorrect in the grand scheme of things. I'd love to hear other ideas on how to handle that scenario.

I have attached a small VI which retains wire values for the entire hierarchy. Copy the VI to your LabVIEW x\project\ folder and restart LabVIEW. You will find a new option in Tools menu >> "Retain All Wire Values". Select this option on the Top level VI and wire values are retained in all its subVIs and itself. Select it again and it removes retain wire values in all its subVIs. (Successive selection alternates between selection and deselection of Retain Wire Values) It is almost as good as native functionality. (VI is saved in LabVIEW 8.5, therefore works for 8.5 and above). 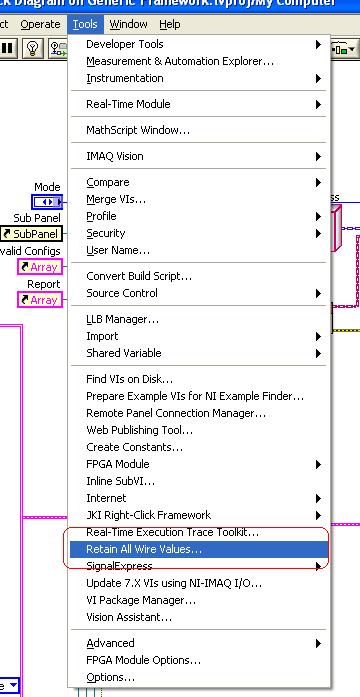