View Ideas...
Active
Inactive
Labels
Idea Statuses
Top Authors
View All
Turn on suggestions
Auto-suggest helps you quickly narrow down your search results by suggesting possible matches as you type.
Showing results for
Search instead for
Did you mean:
Options
1 Kudo

In Probe Window, right clicking on the Graph of a probed waveform and selecting Visible Items/Graph Pallet allows you to zoom in on a portion of the graph.

However, the zoom button has been moved outside of the cluster, and can't be moved. Useful feature, but just needs a cleanup.

Mine's out of whack: 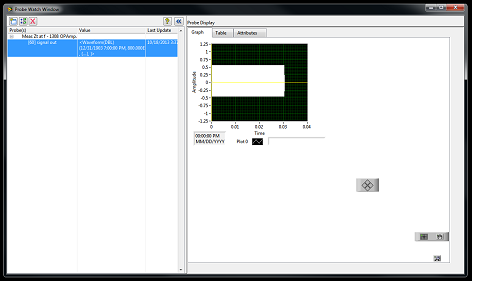 Anybody know how to fix it? It doesn't move, even with the program stopped. Something similar to edit controls, or??? The version is 2012, 32bit.

I withdraw what I said. I was not using a "Waveform" probe, but a "Custom Probe" which I chose to be a Chart (I used a simple numeric as the source).

If I use a waveform as a source, and use the default "probe" for that, which is what you are displaying, then yes, even in 2013, that bug occurs.

This is not an Idea, this is a bug report and it is still active in LV 2015. Please fill a CAR at the very least!

There is actually a related bug for Chart, as illustrated below: 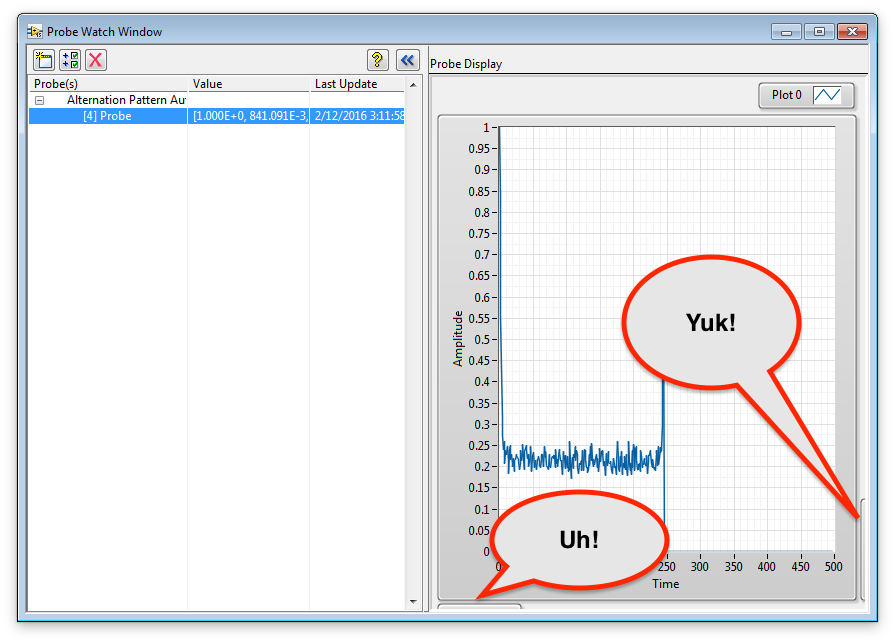 Choosing a Custom Probes>>Controls>>Graphs>>Waveform Graph as a probe will maximize the graph size and present it "bare". You can (try to) show some additional tools (only AFTER it is executed once, which I suppose does not qualify as a bug but merely as a "feature"), such as Graph Palette or the Cursor Legend, but they will end up outside the visible area. Resizing the probe window doesn't help.

This is also true of XY Graphs and Waveform Charts.