As a debug tool, it would be incredibly helpful for me if I could pause at a certain point in the code when a value meets a certain criterion, without having to edit the code.

This functionality already exists as the "condition" tab for an error cluster in the Probe Watch Window, but does not exist for any other type of data.  (In the image below, I'm showing that the "condition" tab will enable me to pause execution when the data on the error wire I've probed is updated, and the "error" boolean of that cluster is TRUE.)

In other words, I'd like to see this behavior become more robust/flexible for other data types.  The alternatives are:

1. In run mode, put in an unconditional break point somewhere in the code, and manually step through the code as I watch the probed wire of interest update to the value of interest, so that I can continue debugging - or

2. Stop the VI an all the VIs which are running on top of it, and in edit mode, create a case structure which evaluates as TRUE whenever the wire of interest is updated with a value I care about (as in this image):

The problem with #1 is obvious - lots of lost efficiency.

There are several problems with #2, being that you must enter into edit mode for this work-around to debug your code:

Well, apparently LV Idea Exchnage barfed on the So here's what I'd like to see image, so I'm re-posting it here:

This already exists in LabVIEW. 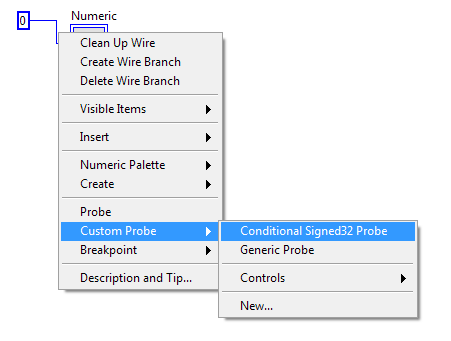 If you do not like this conditional probe, you -- or any user -- have the power to write your own custom probes. Custom probes allow you to present any sort of UI that you wish for displaying a value and breaking execution on a value.

The list of useful probes for data types is really large and open-ended. Several years ago, LV R&D made the call to put attention into making it possible to create custom probes rather than spend time enhancing each individual probe ourselves. From time to time, we have added new custom probes, but it has not been a priority to enhance the probes of a particular data type. But we do have the range checking probes that you asked for.

Since you work for National Instruments, if you do build probes that you think are better for a given data type, send them to LabVIEW R&D and see if they can be put into the next version of LabVIEW.

Any users who do not work for National Instruments may choose to share your probes with the community through the ni.com forums or through the LAVA Code Repository.

Alright, thanks for the insight.  I'll take a look at 'em.

The link posted by Darren is a case of the proverbial serpent biting its own tail it would seem...