I have never noticed a problem with spam on this site until this morning. I tried the ignore user feature for the first time and apparently it is only for private messages. Maybe that should include public posts as well.

This could be taken further. What if a user were able to click a "Block Spammer" button in another users profile to block all of their messages from public view, or at least block further posts. This would obviously be something that a moderator would have the power to override or concur with. I wouldn't give this power to any user. I would only give it to users who are at a certain level. Definitely Knights and Proven Zealots. Possibly Trusted Enthusiasts. This is not a power that I think would be abused. Abuse would result in loss of the account and I know that users at these levels would never intentionally abuse this kind of privilege.

I think this will help the forums admin in handling unwanted user posts.

But I think this days "attack" on the forum will probably not be stopped by a function like this.

For the "Block Spammer" button, I think that for this to work, ether the admin has to agree before it takes effect, or it should only be very few users who has this button.

And I hope that the admins have some function now to delete a user and ALL his/her/bots posts.

At the moment they have posted more than 6 pages.

I am sure that the forum has mechanisms in place to prevent this kind of attack, so I am very surprised that it succeeded.

They arrivied are still arriving at a rate of 5-6/minute for the same handful of brand new users, with, what seems to be virtually identical links to a site in russia. This was either an automated attack or some very busy minions trained to do this kind of thing.

Simple bayesian filtering and behavior detection would have detected and slowed down these users after one or two posts. Obviously, an attach vector has been found that exploits a weakness, so it is time to update.

Every similar site in the world has to deal with these kinds of things, and typically the NI forums are kept relatively clean.

I agree that there should be a collection of trusted users spread over all time zones that have certain extra priviledges to deal with this kind of spam directly.and quickly. They would simply have a few extra menu entries.

For example user profiles could have a menu entry to tag a spammer, at which time the users and all his posts would become invisible to the general public and highlited with a different background color for moderators for the final disposition. This action would be fully logged with the time and user, so anyone abusing the system (e.g. to silence a critical answer to their own post) would have priviledges revoked. 😉

There should also be limits in place for new users (e.g. no more than X new threads/time unit). New posts by new users could be placed on hold until approved by one of the trusted users.

But I think this days "attack" on the forum will probably not be stopped by a function like this.

Why wouldn't it be stopped by a function like this? It would be very few users who have a button like this. The whole idea is that it would take effect before the admin agrees. It is the weekend so we probably just have to live with the spam until tomorrow.

After some more thought, instead of automatically granting Knights, Proven Zealots or Champions this power, it should be something that users apply for. The admin grants this based on whatever is appropriate.

Here is how I see it working.

An alternate sequence of events

There seems to be only three or so accounts that are blasting the board with spam.

I agree that the current moderators are understaffed and probably to busy preparing for NI week, or otherwise gone for the weekend.

It started with this posts that I immediately reported as spam, but which is still sitting there untouched after 24 hours. 😞

There need to be at least 50-100 trusted volunteers with some extra privileges, that visit the forum regularly. They can react quicky to stem the tide.

They should be able to:

Currently, the LabVIEW forum is completely unusable because of the S(pam)/N(oise) ratio. There is no way to find interesting posts.

Currently, the LabVIEW forum is completely unusable because of the S(pam)/N(oise) ratio. There is no way to find interesting posts.

There is nothing else to say. I fully agree.

I like the idea of limiting how many posts that a new user can originate. But I do think that their first post should be immediately visible. They might have came here for the first time through the link in the getting started window. Then again, after reading what I just wrote, I realize that a bot can just create a new user for each spam which would be even more frustrating. But for unblocking first messages there should be many more people with that ability than the 50-100 who can tag a spammers account. The former should be automatically granted after some level of participation and the latter something that has to be applied for.

I like Ben's proposal: Many Trusted Enthusiasts and especially the Knights are that frequent visitors to the forum that they should be able to stop the spam.  This would have saved this sunday

There are unlimited way to fine tune the system:

First of all, participation in the forum is tied to the creation of a NI profile. Mine is so old that I don't know how things work, but there should be a confirmed op in such that the profile can only be used for forum participation after a confirmation link sent to a verified e-mail address is clicked.

First posts by new users could be handled on a sliding scale:

Plain posts: One new thread allowed per new user, per 10 minutes (within 10 minutes, they can edit the original post to add more information)

Posts with links: (except with links to well known trusted sites): need to be approved.

(The forum could tie into a reputation database, such as WOT, see image below).

Same for posts with images to external sites. 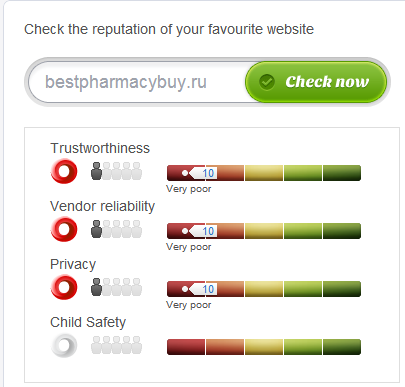 Post approval is typicailly a very quick action. Until somebody trustworthy reads the post, it does not matter if it is invisible to other newcomers who probably don't have an answer anyway. It will only take minutes on average.