The included Serial RapidIO core is configured to run two independent ports (Port 0 and Port 1) at 3.125 Gbps. It uses the Initiator/Target style of I/O port using the HELLO packet format.

and one top-level FPGA VI:

The following steps describe data flow in the application:

In Example - SRIO Target (Host).vi, the current Device ID is read at start and displayed on the Front Panel. To change the target's Device ID, change the value in the Device ID control and press the Write Device ID button. Subsequent transactions to this target must use the new Device ID.

The Target ID on the Example - SRIO Initiator (Host).vi must match the Device ID on the Target in order for transactions to be successfully received. The initiator sends its own Device ID as part of the transaction, and responses from the Target include the Initiator's Device ID to ensure that the response reaches the correct endpoint.

Although the NI 6592R has 4 ports, this sample project uses a Serial RapidIO core which only instantiates ports 0 and 1. You may connect port 0 and 1 on one NI 6592R or connect ports on two different devices.

Use Example - Prepopulate Memory (Host).vi to write data directly to the FPGA's memory space. This method populates the device memory with known values.

Generating and Integrating Serial RapidIO IP into Your LabVIEW Project

For information about how to integrate Xilinx IP into a LabVIEW project, refer to Knowledge Base article 6R6EOLM3.

An Eye Scan allows you to determine the quality of your link statistically. To run an Eye Scan on a receiver, follow these steps:

If you are trying to stream between two different devices and receive an error because the port is not ready but your cables are connected, run the VI on the other device and try again. There must be an active Serial RapidIO core on both sides of the connection for a high-speed serial link to be established.

Hi Johnnyg17. Recently I am working on a POC and I found your article is really help for me. but  I still run into several problems. Could you please help me ? 1.I followed the steps in the attached guide "SRIO Vivado Guide.docx" and I completed all the steps.but the .xci file won't appear in the CLIP file folder automaticly，I need to copy it and add to the folder.Is that right？  2.If I want to run the program, I need to compile the FPGA.vi, right? How to chose the top clock? Should I choose the PXIe-CLK100 or on board clock? 3.When I compile the FPGA.vi，always failed，I don't know where the problem is. That's all the problem I met now,hope that you could give me some information or solution,Thank you very much! 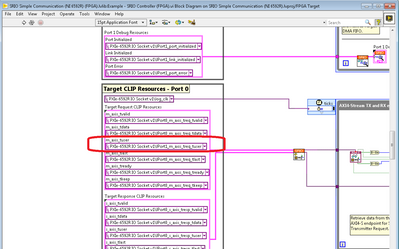