Integrating into the LabVIEW Menus

» Creating a Development Tool » Integrating into the LabVIEW Menus

Menu integration is needed for many LabVIEW tools. Menu items give the end-user quick and easy access to an add-on's functionality.  This document will illustrate how to place items into the menus and how to customize their appearance.

Custom menu items may be placed in the LabVIEW File, Tools, and Help menus. Custom menu items can be created by placing folders and VIs in select LabVIEW sub-folders. The following table lists menu and corresponding folder location for custom menus, where labview is the installation directory of LabVIEW, for example C:\Program Files\National Instruments\LabVIEW 2009.

Note: Custom menu items in the wizard directory will be displayed  in the "File" menu for VIs, but not for projects.

VIs will open when selected from the menu, but will not automatically run. If a VI should run when selected, set the VI to “Run when opened” in the Execution page of VI Properties.

The following image is an example of a custom menu item, “Custom Menu” created in LabVIEW. Notice that “Custom Menu” contains two items and one sub-menu. The folder structure is also shown.  Notice that this folder is located in labview\project and contains two VIs and one sub-folder. The VIs are displayed in the menu as items, and the sub-folder is displayed as a sub-menu.

The VI Window Title (File » VI Properties » Window Appearance » Window title) is the used for the item name. By default, this is the name of the VI, with the “.vi” extension removed. In the above example, A. First VI.vi is listed in the menu as “A. First VI...”. You may also customize the menu item name by changing the Window title. All VI names in the menu are terminated with an ellipsis (“...”), indicating to the end-user that an action will take place.

Folders are given the same name in the menus as on disk. In the above example, the folder “Custom Menu” contains a sub-folder “B. Sub Menu”; these are listed in the Tools menu by their folder names.

Menu items, both folders and VIs, are listed alphabetically by default. This layout can be customized with a ASCII text (.txt) file. By creating a text file in a sub-folder, you can change the order of the items and insert separators.

This text file would modify the menu item order and insert a separator, as seen below.

It many situations, it is useful for a menu item to obtain information about the VI that was open when the menu was selected.  The example Get VI Information from a Menu Item illustrates this process.

so i'm placing something in the file menu....and it's appearing 3d in the list between "New..." and "Open..". Is there any way to specify where it gets inserted at the top level??

You can create a custom layout to re-order the top level by creating a wizart.txt in the \wizard\ folder.  For an example, the Viewpoint TSVN toolkit on the Tools Network makes use of a wizard.txt file to modify the order of items in the File menu.  This is also something to keep in mind - other libraries may also require a wizard.txt and therefore I recommend taking the following action in a custom action VI:

Add line separators as described in the doc above by inserting a dash ("-").

I'm looking for documentation on adding items to the right-click menus within a project.

Specifically, the My Computer and Target menus: 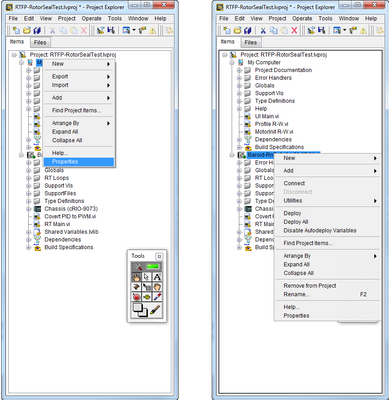 Are there any references I have overlooked for "how-To" do this?

And, also to the Project's File menu, since it doesn't include the items added to the VI's File menu.

Thanks for any suggestions or references.

Matt-J
NI Employee (retired)
on
Options
Hi James, Sounds like you may want to look into using the Project Provider Framework to add items into right-click menus. See below for some additional detail: http://forums.ni.com/t5/Developer-Center-Resources/Customize-the-LabVIEW-Project-Explorer-Using-the-... Note, this method is not officially supported by NI.
Matt J - NI Tools Network

Hi to whoever may read this !

Is there any mean to bind custom keyboard shortcuts to open/launch VIs added to the Tools menu ?